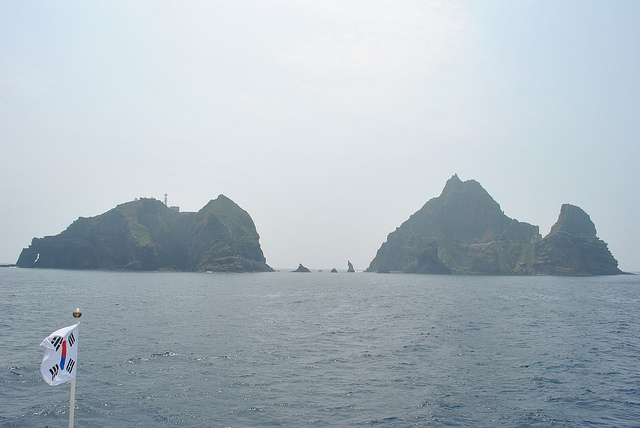 Dokdo, which lies closer to South Korea in the East Sea between the Korean Peninsula and Japan, has long been a source of tension between the neighbors. (image: Flickr/ Republic of Korea)

TOKYO/SEOUL, Jan. 20 (Korea Bizwire) – Tokyo has complained to Seoul about a reference to Dokdo as South Korean territory on the latter’s Olympic website, a report said Friday.

Citing multiple sources, Kyodo News said the Japanese foreign ministry has asked South Korea to stop referring to the islets as South Korean territory on the website of the 2018 PyeongChang Winter Olympics.

Dokdo, which lies closer to South Korea in the East Sea between the Korean Peninsula and Japan, has long been a source of tension between the neighbors. This week alone, Japanese Foreign Minister Fumio Kishida told reporters in Tokyo that the islets are Japan’s own territory, calling Dokdo by its Japanese name, Takeshima. The South Korean foreign ministry in turn called on Japan to stop making such “deplorable” claims.

According to Kyodo News, a Japanese government official also pointed out that making such political declarations on an Olympic website is in violation of the Olympic Charter, and said an official with the Olympic organizing committee didn’t offer a clear answer on PyeongChang’s next steps.

The English site for PyeongChang 2018 introduces Dokdo and its neighboring Ulleung Island as “Korea’s Easternmost Islands” under its “Republic of Korea Culture” section. The accompanying blurb says, “Dokdo holds a special place in the hearts of Koreans as they hold pride in defending Korea’s easternmost reached territory.”

“Dokdo is South Korean territory,” he said. “These claims (by Japan) aren’t worth responding to.”

Lee said the organizing committee hasn’t received any complaints from Japan through an official channel.