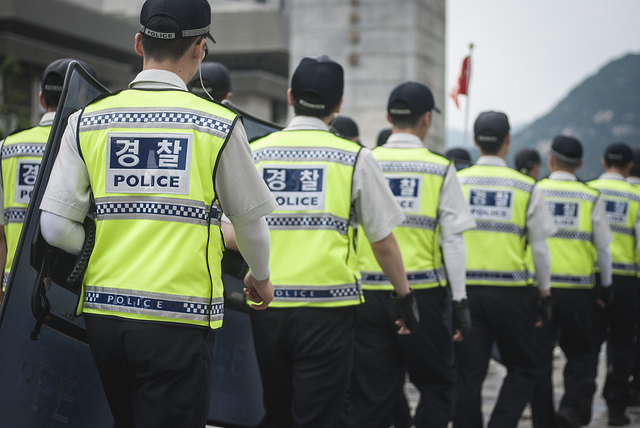 Korean National Police Agency will run drug test for the applicants who get unreasonably high scores in the physical fitness test (Image:Oliver Newman/Flicker)

SEOUL, Nov. 12 (Korea Bizwire) – Drug test will be mandatory for all applicants who sit for police exams from next year. There have been rumors that some applicants take drugs including steroid in order to receive the higher scores in the physical fitness test. The doping test was introduced to dispel those rumors.

The National Police Agency (NPA) announced that it has allocated 59 million won (US$53,800) for drug test for police test next year. Since the clause for drug was amended in the “Ordinance of appointment of public servants,” which came into effect from last month, the legal ground is sufficient to introduce the doping test scheme.

The target for the drug test will be the applicants who get unreasonably high scores in the physical fitness test. It is because the doping test costs as high as 300,000 won (US$273) for each run.

The physical fitness test takes 25 percent of the total score which is the second most important part for the applicants as the written exam takes the most as high as 50 percent and the interview takes 20 percent and the remaining 5 percent is for an additional mark given to some high-qualification applicants.

The physical fitness test consists of five parts including a 100-meter sprint, a 1k run, a sit-up, a hand grip strength test, and a press-up.

The maximum score is 10 points in each part, but the marking criteria are divided further in detail. For example, in the case of the 100-m sprint, any examinee who cuts the 100-m line within 13 seconds will receive a full score, but runners who cuts the final line between 13.1 to 13.5 seconds will get 9 points, thus the competition among examinees become cutthroat, as 0.1 second may determine the final outcome of whether the applicant passes or fails.

The NPA said that there was no case found in the previous exams where examinees took any illegal substances including drugs, but the introduction of the drug test will deter any attempt of taking drugs before the physical fitness test.

As the drug test scheme is introduce for police exams, the same procedure will be held for firefighters from next year at the earliest. However, recruitment of firefighters depends on local governments, so the exact time of introduction has not been decided yet.

According to the administrator of the National Emergency Management Agency (NEMA), the ordinance for appointment of firefighter has been revised so the drug test can be administered from next year as well, but there still are budget and time issues, thus the final decision should be made by the local governments.