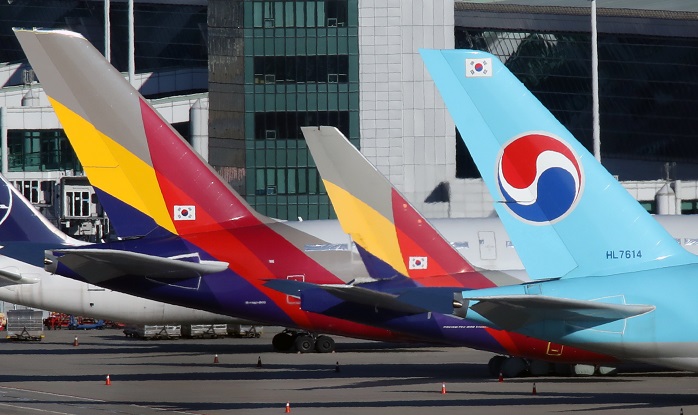 In November 2020, Korean Air inked a deal to acquire a 63.88 percent stake in its smaller rival Asiana Airlines, a deal valued at 1.8 trillion won (US$1.5 billion) that could create the world’s 10th-biggest airline by fleet.

The Fair Trade Commission (FTC) said in its 2022 policy plan that it will “swiftly and closely” review Korean Air’s merger and other takeover deals aimed at industrial restructuring.

“We expect the FTC to hold a deliberation session to make a decision in January or February,” Kim Jae-shin, vice chief of the regulator, told a press briefing.

The commission recently sent a report to Korean Air, which a Korean Air official said detailed conditions of the approval of Korean Air’s takeover deal.

Korean Air said it was closely reviewing the commission’s report. The flagship carrier will have four weeks to review it, according to the regulator.

If approved, the takeover is expected to reshape the country’s airline sector that has been reeling from the fallout of the COVID-19 pandemic.

But critics said the conditions put forward by the regulator for approval appear to fall short of addressing a monopoly in the country’s airline industry.

The FTC also said it will strengthen the monitoring of unfair business activities by online platforms this year in a bid to encourage competition in the digital sector and protect consumers.

The commission said it will focus on keeping close tabs on whether mobility and online shopping operators abuse their dominant market status and hamper competition.

Amid a non-contact consumption trend, online platform giants, such as Naver Corp. and Kakao Corp., have aggressively expanded into new businesses with their increased market presence.

There are concerns that powerful online platforms have abused their market status and engaged in unfair business practices against suppliers and contractors, posing a threat to the survival of small merchants.

The FTC said it will also strengthen a probe into unfair business activities related to intellectual property rights in web-based cartoons, novels and music services.