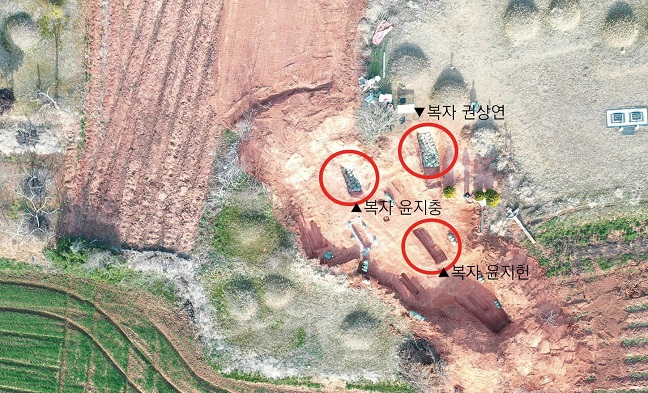 This image, provided by the Diocese of Jeonju, shows the locations where the remains of three Korean Catholic martyrs were recovered in Wanju in March.

JEONJU, Sept. 1 (Korea Bizwire) — The remains of three people known as the first Korean Catholic martyrs have been recovered in Wanju two centuries after their deaths, the Diocese of Jeonju said Wednesday.

The remains were identified as those of Paul Yun Ji-chung and James Kwon Sang-yeon, who were beheaded in 1791, and Yun’s younger brother Francis Yun Ji-heon, who was quartered in 1801, the diocese said during a press conference in Jeonju, 243 kilometers south of Seoul.

They were found in March in Wanju, just outside of Jeonju, near the burial grounds of another beatified person’s family members during work to convert the site into a sanctuary, according to the diocese.

The remains were confirmed to belong to the martyrs following historical research and DNA testing.

“The discovery of the remains is a truly amazing and monumental event,” Bishop John Kim Son-tae, head of the Jeonju diocese, said in a statement.

“This is because our Church, which has grown on the foundation of the bloodshed by martyrs, has finally found the remains of the people who began the history of martyrdom,” he said.

The bishop said he gives “deep thanks, praise and glory to God, by whose providence this happened.”

The martyrs were among the first Korean Catholics killed by Korean rulers who feared the spread of Catholicism would undermine the nation’s Confucianism-based ruling ideology.

All three were beatified by Pope Francis in 2014.

This compilation image, provided by the Diocese of Jeonju, shows the remains of three Korean Catholic martyrs (from L to R) — Paul Yun Ji-chung, James Kwon Sang-yeon and Francis Yun Ji-heon — which were recovered in Wanju in March.

The diocese said the remains showed cuts made by a sharp object around the neck of Paul Yun Ji-chung, and around the neck, upper arms and left femur of Francis Yun Ji-heon.

No wounds were found on the remains of James Kwon Sang-yeon, but parts of his skull and neck bones were missing.

Experts took measurements of their bones and determined that Paul Yun Ji-chung likely stood 165.2 centimeters tall, while James Kwon Sang-yeon measured 152.5 cm and Francis Yun Ji-heon 163.9 cm, each with a margin of error of 3.8 cm.

According to the diocese, Paul Yun Ji-chung and James Kwon Sang-yeon were cousins who together abolished Confucian ancestral rites and burnt mortuary tablets.

When this became known, the two fled to escape punishment, but when one of Yun’s uncles was arrested in his place, they surrendered themselves to the authorities.

Even while being taken to the execution grounds, Yun is said to have appeared joyful and shared his faith with those around him, singing “Jesus” and “Mary” until the moment the blade fell on his neck.

The younger Yun was 37 at the time of his execution 10 years later.

The diocese said it plans to hold a Mass and an enshrinement ceremony in honor of the three martyrs on Sept. 16, near the site where their remains were found.