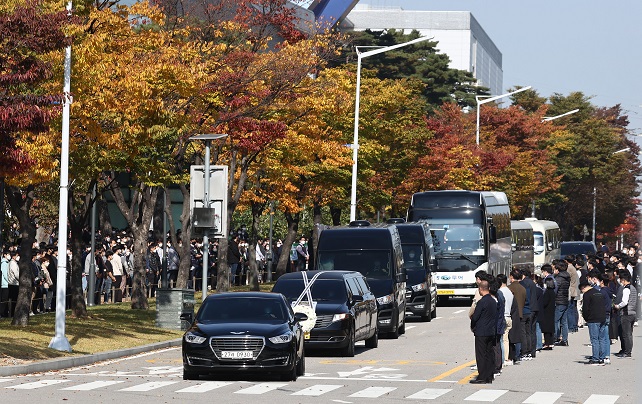 A hearse carrying the coffin of late Samsung Group chief Lee Kun-hee and other vehicles exit Samsung Electronics’ chip plant in Hwaseong, south of Seoul, on Oct. 28, 2020 as Samsung employees line up to mourn the death of their longtime chairman. (Yonhap)

SEOUL, Oct. 28 (Korea Bizwire) — Samsung Group chief Lee Kun-hee, one of most influential businessmen in South Korea’s post-war era, was laid to rest in a funeral Wednesday as his family, friends and associates mourned his death.

Lee, who built the country’s largest conglomerate, died Sunday at age 78, more than six years after being hospitalized for a heart attack.

The send-off ceremony for Lee was held in a private manner at a funeral hall at Samsung Medical Center in southern Seoul around 7:30 a.m., with his wife, Hong Ra-hee, and his scions, including Samsung Electronic Vice Chairman Lee Jae-yong, in attendance.

Hyundai Motor Group Chairman Chung Euisun was also at the ceremony to pay tribute to the late business mogul.

The ceremony, which lasted about a hour, started with eulogies from Lee’s longtime colleague and a high school friend introducing his achievements and sharing their memories with the late tycoon.

“I have been to many countries in the world, but I have never seen a man like him who did better than his father,” said Kim Phil-kyu, K.P.K International chairman who knew Lee for more than 50 years.

The funeral procession for Lee, which was joined by former and current executives of Samsung Group, traveled to places where he left a footprint at Samsung, including his house, Leeum Samsung Museum, and Seungjiwon in central Seoul, which he often used as an office.

The procession also visited Samsung Electronics’ chip plants in Yongin and Hwaseong, both south of Seoul, where hundreds of workers there lined up to catch a last glimpse of Lee.

With a banner saying “We will remember the chairman’s footsteps forever” hung up on the main gate of the Hwaseong plant, some of the workers shed tears as they said their final goodbyes to the late chief.

The hearse carrying the coffin of Lee arrived at a family grave site in Suwon, where his ancestors are buried, around 11:55 a.m.

The burial ceremony for Lee was also held privately with his family and a few Samsung executives in attendance.

Samsung earlier announced that Lee’s funeral will be held in a modest manner with family members, and it courteously declined visits from others amid the COVID-19 pandemic. 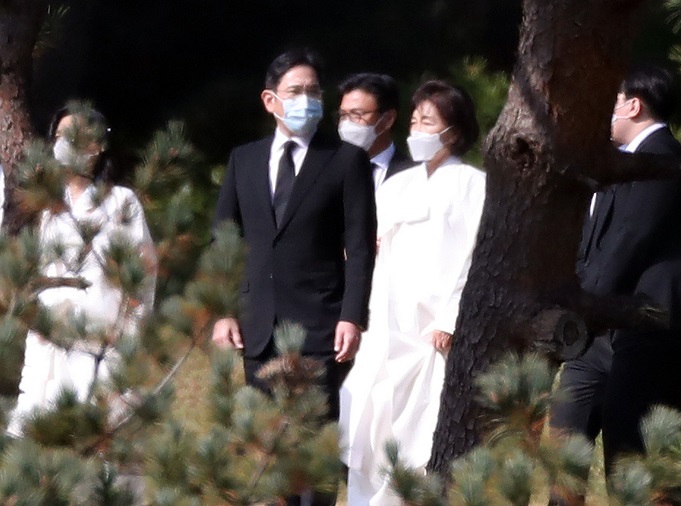 Lee has been recognized as a man who led the tech giant to become the world’s leading player in the semiconductor and mobile phone sectors with his outstanding insights.

Born in Daegu in 1942, he officially inherited the Samsung crown in 1987 at the age of 45 when his father Lee Byung-chull, founder of the present day Samsung Group, died.

In 1993, Lee Kun-hee announced his first trademark business philosophy, the “New Management Initiative,” which has been embraced by Samsung like a doctrine to date.

In his 33-year reign, Samsung Group saw its assets jump to more than 800 trillion won (US$708 billion) from 10 trillion won.

His only son, Jae-yong, is widely expected to serve as the new leader of Samsung Group, whose business portfolio ranges from tech and construction to finance and an amusement park.

The 52-year-old Jae-yong has been the de facto leader of Samsung since his father collapsed in 2014 due to a heart attack.

Many leaders from the political, business and sports communities visited the funeral parlor for Lee in Seoul over the past three days to offer their condolences before he was laid to rest.