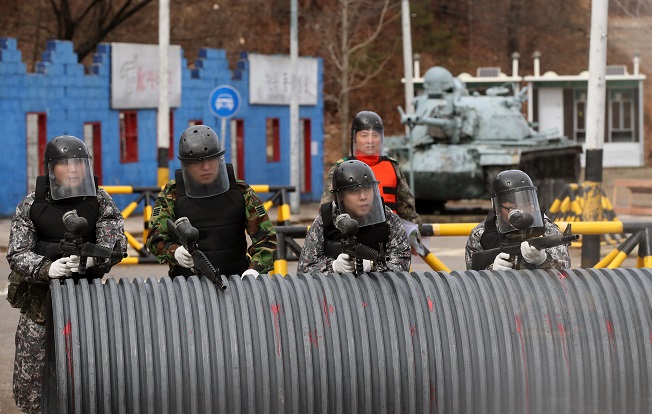 In this file photo, taken on March 5, 2018, members of reserve forces engage in a street fighting drill at an Army unit in Seoul’s Songpa Ward after they were mobilized to participate in the year’s first mandatory exercise. (Yonhap)

The Supreme Court approved lower courts’ verdicts of not guilty for the man indicted for violating the Homeland Reserve Forces Act after refusing to take part in his reserve forces training on grounds of his belief of nonviolence.

It is the first ruling from the Supreme Court that recognizes personal beliefs, not religious reasons, as the justification for refusal to perform the duties of reserve forces.

South Korean men are obliged to go through one training session of one to three days in duration per year as reservists for six years after completing their mandatory military service.

The Supreme Court said, “Even if a conscientious objector refuses to perform reserve forces training based on ethical, moral or philosophical beliefs other than religious beliefs, it should be regarded as a legitimate reason of rejection stipulated by the reserve forces law.”

The defendant, who was discharged from the military in February 2013 and transferred to the reserve forces, has stood trials for refusing to participate in 16 rounds of reserve forces training from March 2016 to April 2018.

District and appellate courts have all handed out a not-guilty verdict to the man, saying his personal belief is true.

The man insisted that he came to believe in nonviolence after living with his violent father as a child.

He also argued that he came to think taking the lives of others cannot be justified even through war after watching a video of American soldiers killing civilians.

The defendant also said he had even thought of refusing to serve in the military itself for his personal belief but changed his mind after receiving advice from his mother and relatives.

In this file photo, taken on March 13, 2020, and provided by the Navy, recruits undergo combat training while wearing masks at a boot camp of the Naval Education and Training Command in the southeastern city of Changwon amid the nationwide spread of the coronavirus.

In its landmark ruling made in November 2018, the Supreme Court said that religious and conscientious beliefs are considered valid reasons for refusing the military service mandate.

In line with the 2018 verdict, the top court last month approved lower courts’ acquittal of a conscientious objector indicted for refusing his reserve forces training for religious beliefs.

But the Supreme Court on Thursday confirmed lower courts’ sentence of one and a half years in prison each for two other alleged conscientious objectors charged with refusing to serve in the military due to personal beliefs in nonviolence, saying their beliefs cannot be seen as genuine.

By law, all able-bodied South Korean men must carry out military service for 18 to 22 months.

One of the two convicted objectors was questioned by the top court about not opposing all wars and having an idea that the use of physical force can be justified depending on the purpose, motivation and situation of the wars.

The other convicted objector was not recognized as having a justifiable reason to reject his military duty after venting his resentment toward human rights violations and authoritarian culture in the military and career breaks due to military service, instead of toward military training.

On the same day, the Constitutional Court dismissed a petition alleging the current law clause, which penalizes those refusing reserve forces training without justifiable reasons, violates the freedom of conscience.

The petition was filed by a man who has been refusing to join reserve forces training after completing his military duty as a skilled industrial personnel.