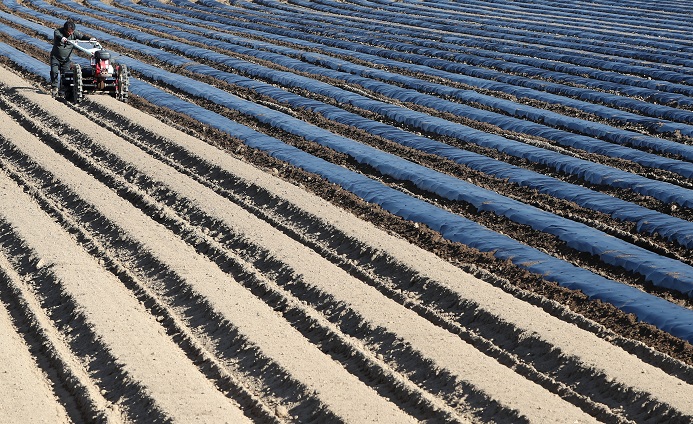 Mulch film is difficult to collect after harvest. (Yonhap)

CHUNCHEON, March 4 (Korea Bizwire) — The Gangwon Provincial Agricultural Research and Extension Services (GWARES) said Wednesday that it will launch a trial project to distribute biodegradable mulch film to corn and sorghum farms in three areas within the province as part of efforts to reduce soil pollution caused by agricultural waste.

Mulch film refers to the vinyl that is used to cover the surface of the soil during farming, greatly contributing to an increase in productivity by enhancing crop quality and harvest yields.

Mulch film, however, is difficult to collect after harvest, and is thereby regarded as one of the polluting factors in the agricultural environment.

Against this backdrop, the GWARES decided to launch a trial project to distribute biodegradable mulch film that is decomposed naturally by micro-organisms and sunlight.

Without the need to laboriously collect the film after harvest, the biodegradable mulch film can prevent environmental pollution, while also saving labor and reducing social costs that are required for the processing of waste.