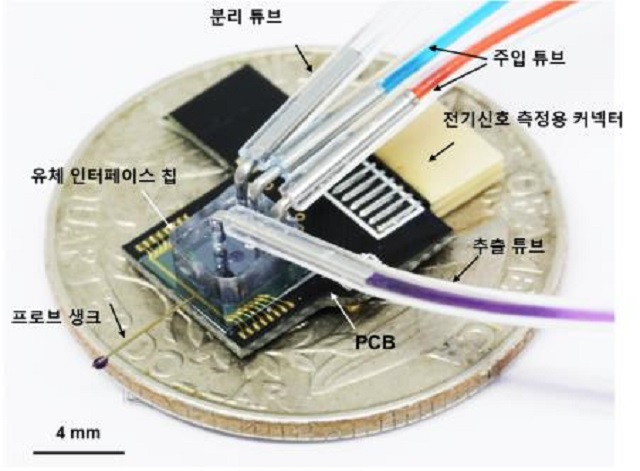 This photo provided by the Korea Institute of Science and Technology shows the institute’s newly developed brain chip.

SEOUL, Aug. 18 (Korea Bizwire) — A South Korean research team has developed an ultra-small multifunctional brain chip that is more versatile and smaller than existing ones.

The size of the newly-developed brain chip is no more than one eighth of the size of existing ones.

Researchers from the Korea Institute of Science and Technology (KIST) said Tuesday the development of an ultra-small multifunctional brain chip that is integrated with fluid tubes for extraction of cerebrospinal fluid and injection of drug substances, and electrodes for measurement of brain signals.

In 2019, the KIST researchers developed a brain chip that enables drug injection and signal measurement at the same time and presented the achievement in an international academic journal.

The newly-developed brain chip is far smaller than the previous one, thus minimizing brain damage that could occur during the insertion stage.

In addition, since cerebrospinal fluid is extracted at a low pressure through a small fluid tube, it can minimize the blockage of the tube that can occur when brain chips are used for a long period of time.