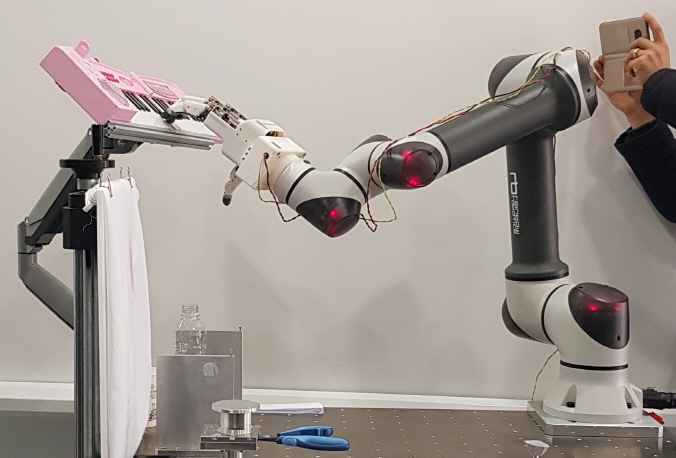 Robotic hands can be used to assemble atypical objects, or in projects that require elaborate movement. (Yonhap)

DAEJEON, Jan. 23 (Korea Bizwire) — The Korea Institute of Machinery and Materials (KIMM) announced on Wednesday that it has developed a robotic hand that can make use of various materials and tools such as picking up and moving an egg or using scissors to cut an object.

The robotic hand is comprised of four fingers and 16 joints, using 12 motors to move in various directions.

The research team made use of sensors that can detect the strength of an object on the fingertips, joints, and in the palm of the robot hand.

The sensors, 15 millimeters wide and weighing less than 5 grams, can measure the strength and direction of a contacted object.

Skin-shaped tactile sensors, developed in tandem with Seoul National University, have been attached to the joints and the palm.

When the hand touches an object, it can measure the size and strength of the object’s area of contact.

The team explained that the hand can pick up objects of various shapes and sizes, including fragile, circular objects like an egg or an apple with a slippery surface.

Unlike previous robots, the motors that work the fingers have been placed inside the palm.

The robotic hand is lighter and stronger than other commercial robotic hands. Weighing a kilogram, the hand is capable of lifting objects that weigh more than 3 kilograms.

They can be used to assemble atypical objects, or in projects that require elaborate movement.

“We developed a robotic hand that can imitate the delicate movements of a human hand,” said Do Hyun-min, the head researcher at the KIMM who spearheaded the project.

“They can be used to create robots for various services and develop platforms in studying gripping algorithms.”