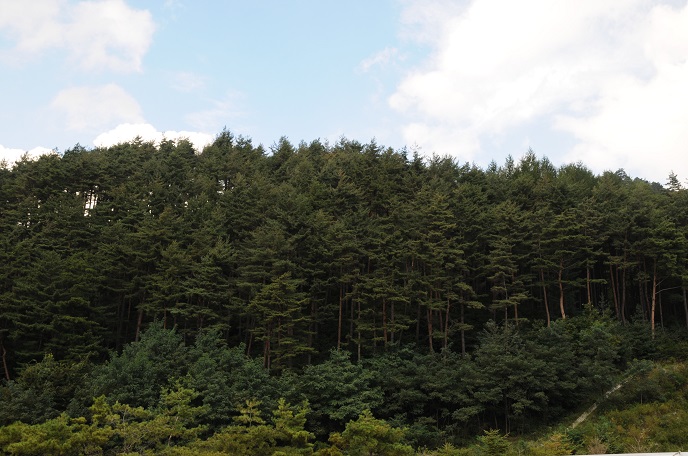 This photo provided by the National Institute of Forest Science shows a pine forest in the coastal city of Uljin.

SEOUL, July 22 (Korea Bizwire) — The state-run National Institute of Environmental Research (NIER) said Wednesday that it had carried out a study to measure air pollution using pine needles and succeeded in standardizing this measurement method.

The study was based on the premise that plant leaves can absorb heavy metallic air pollutants such as lead floating in the air during the process of breathing.

The NIER used pine needles, which grow on trees for more than two years and can be collected regardless of seasonal factors.

After collecting pine needles around the areas subject for measurement of air pollution and bringing them to a laboratory, the NIER analyzed the degree of pollution.

The NIER said that this method of using pine needles to analyze air pollution would enable the measurement of air pollution even in areas where it’s difficult to bring measurement devices or there are no measuring stations.

Moreover, the study laid a foundation for the development and research of environmental indicators using biological species like pine needles.

The NIER plans to invigorate the study of measuring air pollution through the use of biological indicators by carrying out pine needle air pollution measurements in some areas on a trial basis from next year.