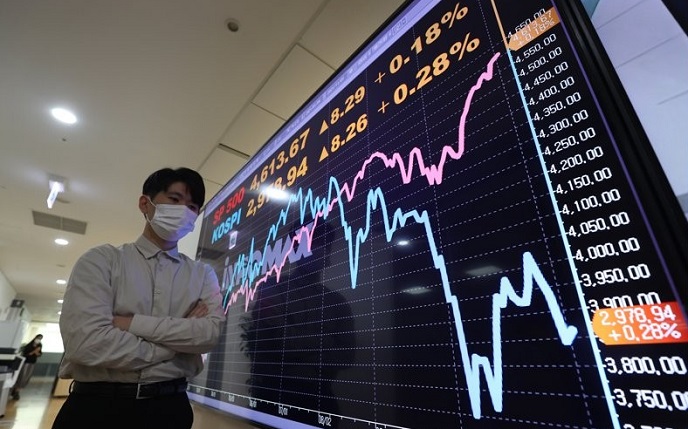 A monitor shows the indexes of the KOSPI and S&P 500 at Yonhap Infomax in Seoul on Nov. 2, 2021. In October, the South Korean stock market declined 3.20 percent, while the S&P 500 rose 6.91 percent, representing the largest-ever monthly decoupling between them since the 2010s. (Yonhap)

SEOUL, Nov. 11 (Korea Bizwire) — As retirement pension funds shift their focus from savings to investment, products such as target date funds (TDFs) and exchange traded funds (ETFs) are growing at a blistering pace.

The reserves for defined contribution (DC)-type retirement pension and individual retirement pension (IRP) products totaled 63 trillion won (US$53.1 billion) and 34 trillion won at the end of last year, up 16 percent and 36 percent, respectively, from a year ago, according to a report released by the Mirae Asset Investment and Pension Center.

At the end of June of this year, the reserves for DC-type retirement pension funds and IRP products amounted to 66 trillion won and 41 trillion won, respectively, up 19 percent and 6 percent from the figures marked at the end of last year.

Retirement pension funds’ investment in TDFs shot up to 6.1 trillion won at the end of September from 303.6 billion won in 2017.

Retirement pension funds and pension savings saw their ETF investments through four major securities firms reach 1.3 trillion won at the end of March 2021, a sharp increase from 183.6 billion won in 2019.