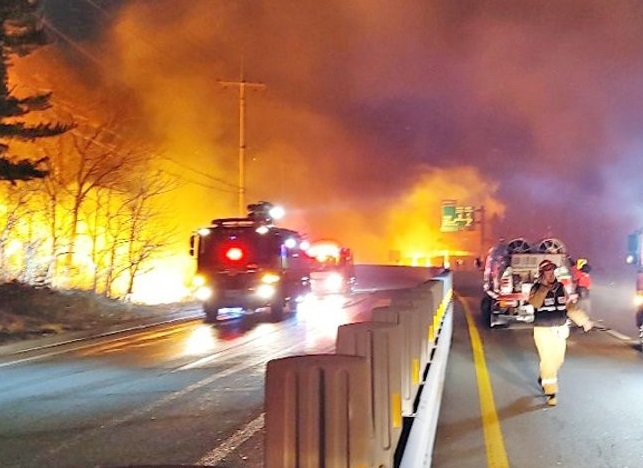 Firefighters attempt to extinguish a fire in the northeastern border town of Goseong on April 4, 2019, in this photo released by the Gangwon Fire Headquarters.

SEOUL, Jan. 12 (Korea Bizwire) — Police vehicle and firetruck drivers that violate traffic signals or cross the centerline while on duty will be exempt from legal punishment from now on, according to a revised road traffic act promulgated Tuesday.

According to the National Fire Agency and the National Police Agency, the revised Road Traffic Act mandates punishment exemptions for emergency vehicle drivers in nine types of traffic violation cases.

Those include traffic signal violations, driving over the centerline, illegal U-turns, driving on the wrong side of the road, failure to maintain safe distances, illicit parking or stops and driving on pedestrian roads.

The revised law also exempts or reduces punishment for drivers of such vehicles in cases of traffic accidents in school zones, considering the urgency and the inevitability of their tasks.

The amendment came amid criticism that the original laws on road traffic and car accidents hinder effective task performance of police and fire authorities as they are most commonly applied to all vehicles, regardless of their purpose of use.

Emergency drivers have also reportedly come under much pressure due to fears of getting penalized for accidents on duty, especially after the country in March last year enforced a law, aimed at strengthening punishments for traffic violators in school zones, dubbed the “Min-sik Act.”

“The latest revision of the Road Traffic Act enables officials on public duty to more eagerly carry out tasks without concerns over (unintended) car accidents,” fire and police authorities said.

“It will greatly help (the police and fire officials) to protect people’s lives and safety by allowing them to quickly arrive at emergency sites within the golden hour,” they added.