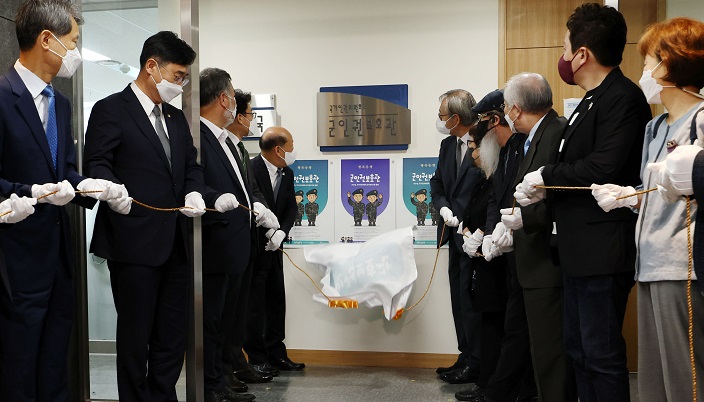 Song Doo-hwan (5th from L), chairman of the National Human Rights Commission, and other participants unveil a plaque displaying the name of the office of its first new vice minister-level officer in charge of the military’s human rights issues during a ceremony at the commission’s headquarters in Seoul on July 1, 2022. (Yonhap)

Park Chan-woon, who is a member of the state human rights watchdog, has been named by the president as the first officer to look into possible rights violations, such as violence and sexual abuse cases, in the military.

“My first mission is to prevent rights violations and sexual violence cases that do not occur in the military anymore,” Park said during an inauguration ceremony.

The officer has the right to probe and visit military bases implicated in human rights violation cases without notice, and attend investigations of military death and sexual violence cases, the commission said.

The officer, however, does not have the authority to arrest or detain a suspect. Instead, a fine of 10 million won (US$770) or less can be imposed when he or she refuses investigation.

Critics say the officer’s power is limited, considering the defense minister can request the officer stop the visit during the investigation.

Calls for the position came after a series of abuses cases, including the high-profile death of Army private first class surnamed Yoon in 2013.

Last year, the National Assembly passed a revision to the National Human Rights Commission Act to establish the position.