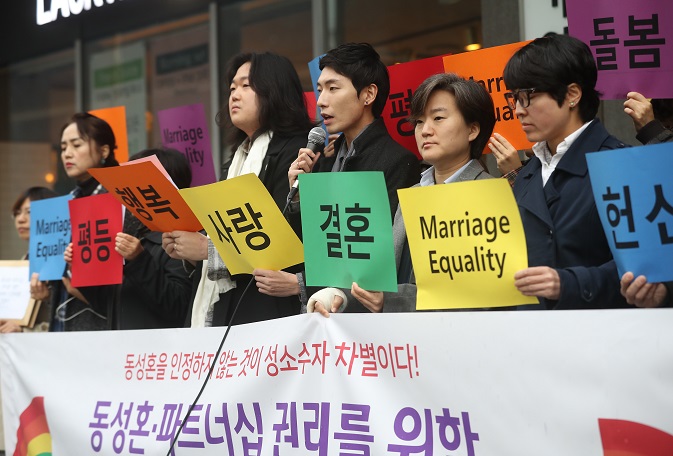 The recommendation followed a petition previously filed by 1,056 Korean nationals in homosexual relationships at home and abroad, claiming they are being excluded from the constitutionally guaranteed rights to marriage and family life in violation of the Constitution and the international human rights law.

The concept of family in the country’s current legal system is based only on traditional family structures anchored in marriage or blood ties, leaving an increasing number of people in various new family formats out of the legal protection, the watchdog said.

In particular, the commission said the country needs to come up with a civil partnership law recognizing civil unions on top of the traditional family structures.

It also recommended the National Assembly speaker swiftly review and handle a revision to the Framework Act On Healthy Families that defines family as a union based only on marriage, blood ties or adoption.

“National family policies need to be approached as a response to changes in demographics or family structures and should be pursued in a way that braces the system for future society,” the commission said.

“If the country clings to a stance recognizing marriages only between a man and a woman and blood relationships based on such unions, our society’s family crisis will only get worse,” it said.

The commission said the enactment of a civil partnership act “could make up for loopholes in the current marriage system and improve social stability and unity by including people on the fringes into the legal system,” rejecting criticism the proposed law would lead to the collapse of traditional families and create social confusion.