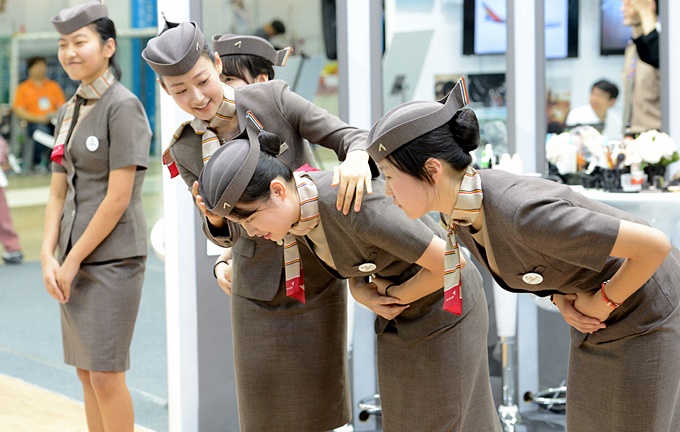 The NHRC recommended that the school in question improves relevant recruiting standards so that applicants’ qualifications are not limited to specific gender categories when admitting new students. (image: Yonhap)

SEOUL, Jun. 26 (Korea Bizwire) — The National Human Rights Commission of Korea (NHRCK) has issued a number of recommendations to an educational institution, saying that recruiting only female students for Aircraft Cabin Service Management programs, which train flight attendants and cabin crews, is discriminatory against men.

One community college selected a total of 190 students for its 2018 Department of Aircraft Cabin Service Management admission, according to the commission Tuesday, allowing only female students to apply for the special admission program that selects 171 of the 190 students.

In the general admission system, male students were able to apply for the test, but only six were selected and admitted, with the remaining 184 students all women.

The school explained that the special admissions process was limited to women because men and women are hired as flight attendants by airlines at a ratio of one to one hundred.

The NHRC recommended that the school in question improves relevant recruiting standards so that applicants’ qualifications are not limited to specific gender categories when admitting new students.

In response, the school reported it will improve the criteria for admission so that male students can apply via all admissions channels from 2022 to the Department of Aircraft Cabin Service Management.