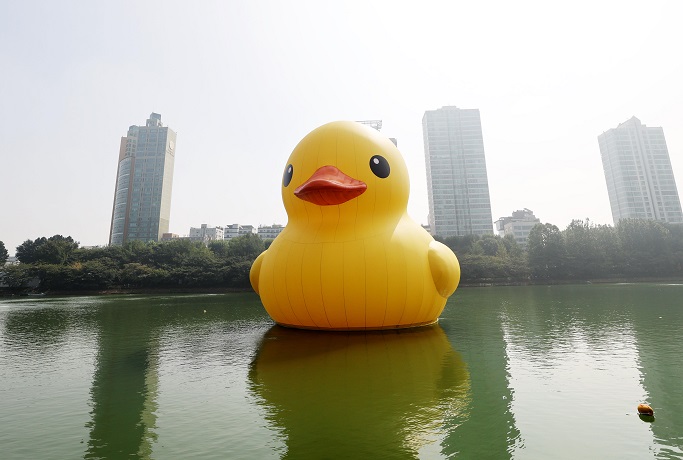 The 18-meter-high Rubber Duck, a giant floating sculpture designed by Dutch artist Florentijn Hofman, appears on Seokchon Lake in Seoul’s Songpa Ward on Sept. 29, 2022, as it returned to South Korea for the first time since 2014. (Yonhap)

SEOUL, Sept. 29 (Korea Bizwire) — Dutch artist Florentijn Hofman’s giant yellow rubber duck is back in South Korea for the first time in eight years, with organizers saying it is meant to uplift the mood of the people amid the pandemic.

The 18-meter-tall inflatable plastic duck will be installed over the waters of Seokchon Lake in eastern Seoul from Sept. 30 to Oct. 31.

The project was organized in partnership between Lotte Group’s property management arm, Lotte Property & Development, and the Songpa Ward office.

Special friends of the supersized duck have joined this year. A number of miniature versions of the duck dressed in Halloween costumes will be hidden inside Lotte World Tower and Lotte World Mall, it said. 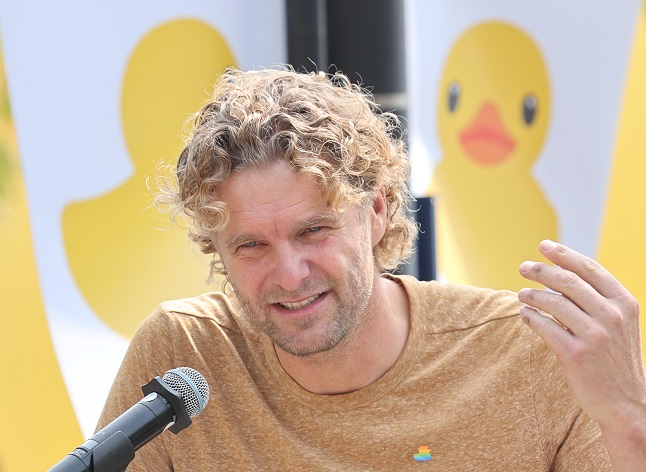 Dutch artist Florentijn Hofman speaks to reporters in front of Seokchon Lake in Seoul’s Songpa Ward on Sept. 29, 2022, during a press conference to showcase the 18-meter-high Rubber Duck, a giant floating sculpture designed by Hofman. (Yonhap)

An event to celebrate the rubber duck’s return was held in front of the installation Thursday, attended by Lotte officials and its creator, Hofman.

“The whole COVID-19 situation in the world was also here in Seoul of course and made me to have ‘no doubt’ to bring it again. Of course the sad happenings of the flooding also made me say ‘yes’ to immediately bring it back,” Hofman said at the event.

“The rubber duck relieves tensions and makes people happy again, and also the people of Korea can benefit from that.”

The “Rubber Duck” public art project, created by Hofman, has been exhibited in 16 countries since its creation in 2007.

The project landed in South Korea in 2014 and garnered over five million visitors.