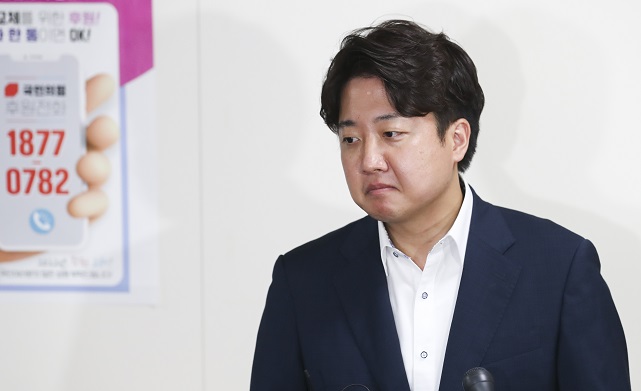 SEOUL, July 8 (Korea Bizwire) — The ruling People Power Party suspended the party membership of leader Lee Jun-seok for six months Friday over allegations of sexual bribery and a cover-up, a decision that is expected to unseat him as party chairman, throw the party into confusion and deepen an intraparty power struggle.

The PPP’s ethics committee delivered the verdict after a near eight-hour meeting over allegations that Lee received sexual services paid for by a businessman seeking his influence in 2013 and attempted to cover up the wrongdoing earlier this year after the allegations surfaced.

Lee, who has pleaded his innocence, said he will not step down as party chairman and will take all possible measures to reverse the ethics panel’s decision, including filing for a court injunction and requesting a reexamination.

“I have no intention to do so,” Lee said on KBS radio when asked if he would step down.

As a first step, Lee said he would invoke his power to put the ethics committee’s decision on hold.

The panel’s decision represents the biggest crisis yet for Lee, who sensationally rose to the PPP chairmanship last year amid hopes the young, Harvard-educated politician would resuscitate the then moribund conservative party.

He was the first person in his 30s to take the helm of a major political party in South Korea. 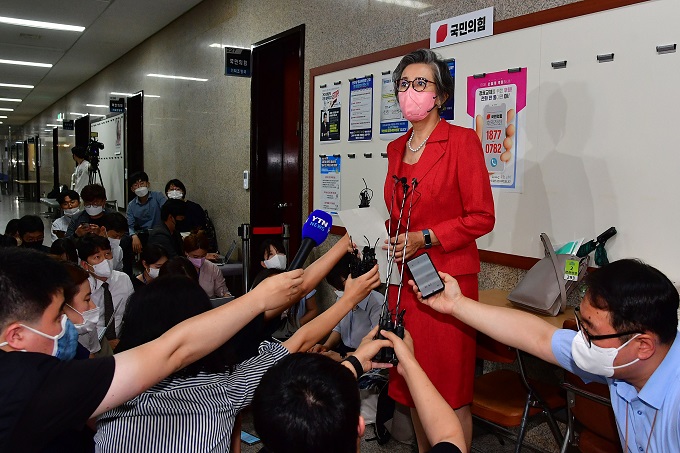 Lee Yang-hee, chairperson of the ruling People Power Party’s ethics committee, speaks to reporters at the National Assembly in Seoul on July 7, 2022, prior to a committee session to discuss the fate of party leader Lee Jun-seok over allegations of sexual bribery and subsequent cover-up. (Yonhap)

Ever since taking over as leader, however, Lee has constantly been at odds with key party members considered close to President Yoon Suk-yeol, who have been collectively dubbed “Yoonhaekgwan” — an abbreviation of “Yoon Suk-yeol’s core associates.”

Lee has claimed the ethics committee meeting was political machinations engineered by Yoonhaekgwan.

“Why haven’t I received congratulations and proper treatment from anyone even after winning the March 9 presidential election?” Lee told reporters Thursday night ahead of his attendance at the committee meeting, almost breaking into tears.

While a suspension in party membership is the second-lowest level of action in the PPP’s four-tier disciplinary system, the decision is expected to deal a major blow not only to Lee but also to the ruling party that won the presidential election in a remarkably close race.

President Yoon Suk-yeol expressed regret, saying he feels shame as one of the PPP members.

“As I’ve always said, I don’t think it’s appropriate for the president to comment on party affairs. … I look forward to our party members coming together to quickly overcome the difficult situation,” Yoon told reporters hours after the decision was announced.

PPP’s floor leader Kweon Seong-dong apologized to the people over the turmoil.

“This is very unfortunate for the party,” he said during a party meeting.

“The party has faced a serious crisis just four months after the presidential election victory and one month after winning the local elections. It is a duty of party members, including myself, to overcome confusion and heal the wounds.”

Under the party charter, Lee can file an appeal against the ethics committee’s decision within 10 days. But there are widespread views that even if he does so, the panel is unlikely to reverse the decision. 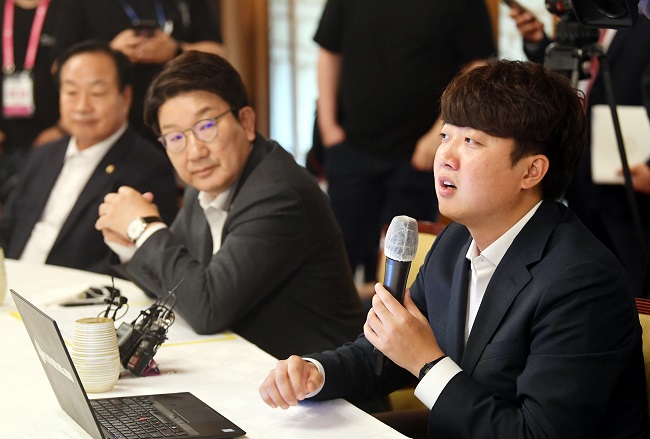 People Power Party Chairman Lee Jun-seok (R) speaks during the first meeting of senior ruling party and government officials since the inauguration of the Yoon Suk-yeol government held at the prime minister’s official residence in Seoul on July 6, 2022. (Yonhap)

In the absence of Lee, floor leader Kweon will play the role of an acting chairman. The PPP could also seek to hold a national convention to elect a new leader or form a collective “emergency leadership committee.”

The channel raised fresh allegations months later that Lee sent an aide to the person accusing him of sexual bribery to obtain a statement denying the allegations in exchange for a 700 million-won (US$538,710) investment promise.

The ethics committee suspended Kim’s party membership for the next two years.

The committee said its decision to suspend Lee’s party membership was for damaging the party’s reputation, adding that suspicions of him receiving sexual services had not been considered.

The committee’s decision is expected to reshape the party’s power structure at a time when Lee is embroiled in a power struggle over party leadership with a pro-Yoon faction of PPP lawmakers.

Even if Lee accepts the decision and temporarily leaves the party, it could spur a fresh round of power struggle among party members fighting to clinch party leadership.

Apart from the PPP’s internal disciplinary process, police are separately investigating the allegations.