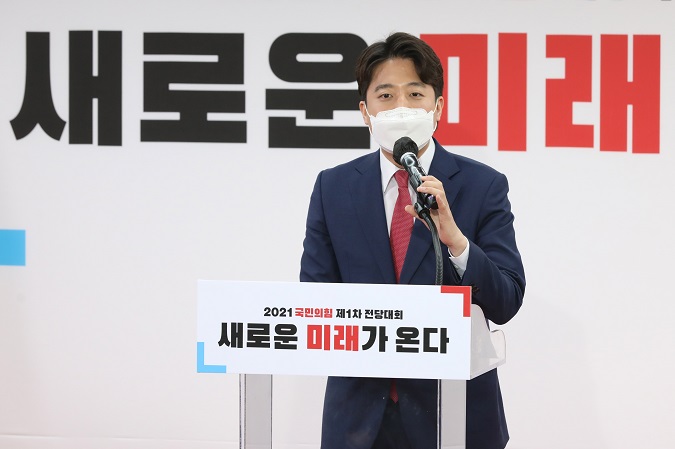 Lee Jun-seok delivers an acceptance speech after being elected as the chairman of the main opposition People Power Party at the party’s national convention in Seoul on June 11, 2021. (Yonhap)

SEOUL, June 11 (Korea Bizwire) — Lee Jun-seok, a 36-year-old politician with no experience as a lawmaker, won a victory Friday to take the helm of the main opposition People Power Party (PPP) as the youngest-ever leader of a mainstream party in modern South Korean politics.

Lee was announced the victor in the party’s convention to elect its new chairman to be in charge of steering the biggest conservative party through next year’s presidential election in March.

The election made Lee the first-ever party leader in his or her 30s to lead either the ruling party or the biggest opposition party in Korea’s modern political history.

The ascent of Lee is widely seen as driven by disgruntled young voters in their 20s and 30s who envision a drastic reform in the conservative party, as well as the broader political establishment.

In his acceptance speech, Lee highlighted his vision to reform the party and secure the party’s victory in the upcoming presidential election.

“Through changes, we will transform ourselves and eventually win (the election),” Lee said.

“Please join us on the road to change the world and smash the inertia (in the party) and prejudices. Then the world will be changed.”

Lee also declared that winning the presidency in the 2022 election is the PPP’s “biggest task.”

Lee also called on fellow party members to abandon “old habits” and seek “fairness” in order to pave the way for the PPP’s presidential election victory.

“From now on, each and every one of you are asked to stand up against those who rely on old habits, like unnecessary slandering, conspiring or framing.”

He said he plans to pick party spokespeople through competitive debates and adopt qualification tests for party members running for elected public offices in a bid to give fair opportunities.

“In order to be able to pass judgment (on the Moon Jae-in administration), the PPP should transform, empower itself and be reborn as a more attractive party.” 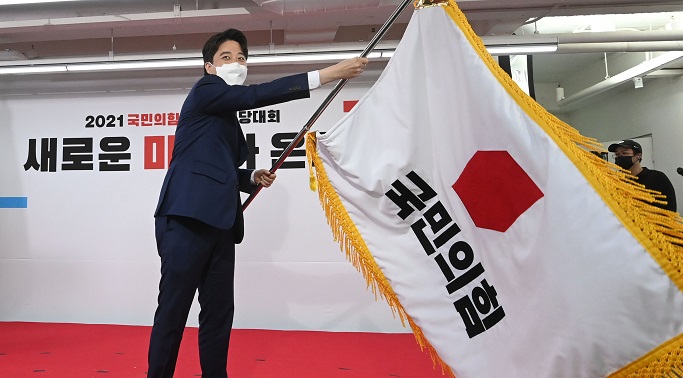 Lee Jun-seok waves the flag of the People Power Party after winning the party’s chairmanship in a party convention on June 11, 2021. (Yonhap)

With no record of serving a parliamentary term, Lee entered the PPP’s leadership race as an underdog.

But his surprise ascent in opinion polls, followed by his victory in the leadership election’s primary in late May, stole the spotlight in the media, which hailed Lee’s advance as mirroring voters’ call for a reform of the conservative party as well as the broader political establishment.

“This is a signal flare launched by the people who hope for holistic change in the political arena,” Kim Hyung-joon, a politics professor at Seoul’s Myongji University, said.

Lee’s sensational pre-election rise in opinion polls also drummed up publicity for the party convention, for which the turnout rate reached a record-high 45.36 percent.

Amid the attention, Lee landed his first-ever spot in a recent public opinion for presidential hopefuls as the fourth favored pick, although by law only those aged 40 or over are eligible to run for the presidency.

A Harvard graduate, Lee first joined the biggest conservative party in 2011 as a member of an interim emergency leadership council at the age of 26 under the auspice of then party leader Park Geun-hye.

He later became a reform icon for the conservative bloc for his unwavering criticism of Park, who went on to become president but faced impeachment in 2017 over corruption charges.

Lee, however, came under criticism from not only outside the party but within his own party for his campaigning against the PPP’s affirmative action for young or female members.

His landslide victory dealt a crushing blow to two established senior party members who ran in the leadership election — former four-term lawmaker Na and incumbent five-term Rep. Joo Ho-young, both of whom served as floor leaders.