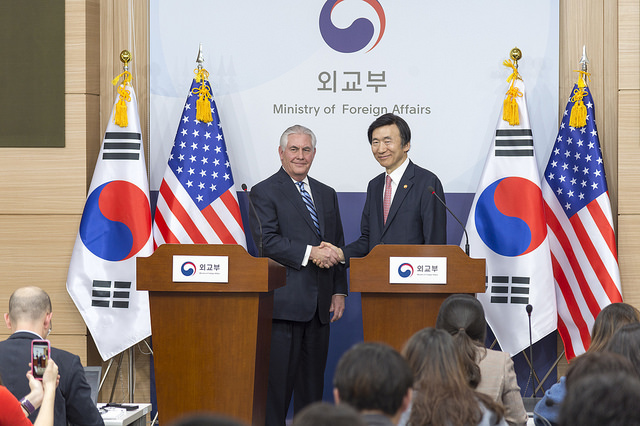 SEOUL, March 21 (Korea Bizwire) – American Secretary of State Rex Tillerson returned to the U.S. yesterday after visiting Japan, South Korea and China. It was a much anticipated timely visit during a politically tumultuous period in East Asia: Growing concerns over North Korea’s ballistic missiles, China’s retaliation against South Korea over the deployment of a THAAD missile battery, and Trump’s protectionism which could put East Asia on a collision course with the U.S. economically.

Unfortunately, what was meant to clear up confusion and open dialogue in East Asia had a reverse effect in the region, leaving behind uncertainty and questions that are likely to linger until further clarification.

Speaking to reporters in Tokyo, Tillerson conceded the American approach to North Korea had come up short, saying, “The diplomatic and other efforts of the past 20 years to bring North Korea to a point of denuclearization have failed.” On the same occasion, he made it clear that without Pyongyang’s denuclearization, there won’t be dialogue between the two countries.

His hardline stance on North Korea’s nuclear strategy persisted during his visit to Seoul, which he began by heading straight to the Demilitarized Zone that separates the two Koreas. Speaking to the press in Seoul, Tillerson said, “If North Korea takes actions that threaten South Korean forces or our own forces, that will be met with an appropriate response. If they elevate the threats of their weapons program to the level that we believe requires action, that option is on the table.”

In Bejing however, Tillerson seemingly pulled a political one-eighty which became apparent in a meeting with Chinese President Xi Jinping, where little to no mention of the hot-button political issue that is THAAD. During a press conference with Chinese foreign minister Wang Yi, Tillerson similarly avoided directly blaming China’s role in both enabling North Korea and its retaliation against South Korea over THAAD. 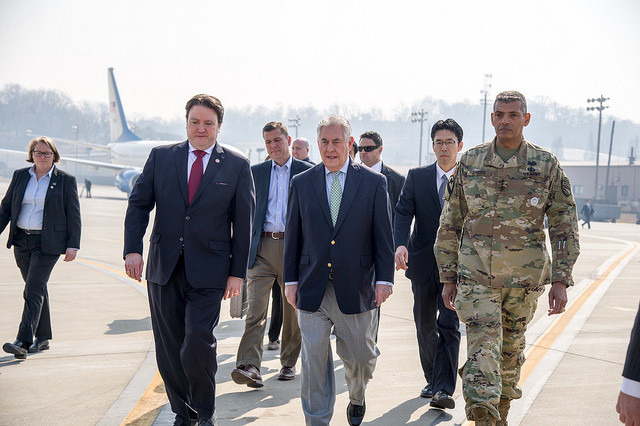 Experts believe Tillerson’s softened tone is part of the Trump administration’s effort to avoid clashing with Beijing head-on, but the lack of direction presented during his visit raised concern in other parts of the region.

Rumors were also rife in the South Korean media that the U.S. Secretary of State allegedly refused to dine with South Korean leaders because of fatigue. Speaking to Independent Journal Review, he later clarified he was never invited for dinner.

Another big rumor sweeping across the media was that Tillerson made a clear distinction between the American relationship with Japan and South Korea, by calling one an “ally”, and the other a “partner”. The subtle difference in Tillerson’s choice of words spawned a plethora of news articles and editorials, leaving a bitter taste.

A piece published by the Korea Times yesterday also highlighted the difference in Tillerson’s description of both the U.S.-Japan and U.S.-South Korea relations, using the words ‘alienated’ and ‘less importance’.

The short-lived rumor saw the State Department chime in to clear up the questions lingering around Tillerson’s remarks during his visit to Japan and South Korea.

“I don’t want to get into any argument over who’s more important in this relationship. We consider both vitally important to the United States,” acting spokesman for the U.S. Department of State Mark Tone said.

After returning from his first tour in Asia as Secretary of State, Tillerson is facing a backlash in the American media for an unprecedented lack of press access as well as his selective choice of media that were on board the plane with him.

NPR pointed to a news vacuum created by Tillerson, who self-admittedly isn’t a big fan of ‘press access’.

“When America’s top diplomats create one, adversaries and allies usually fill it with their own narrative of events, their own proposals, their own accounts of encounters with Washington.”

As U.S. Vice President Mike Pence is set to visit Asia sometime next month, mixed reviews of Tillerson’s visit remain a precedent not to be followed.