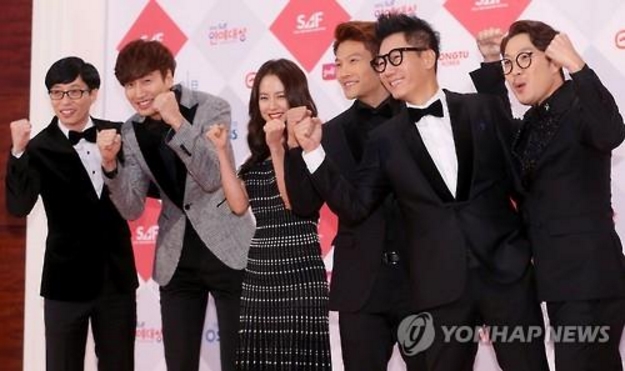 The entire cast of the SBS TV’s popular variety show “Running Man” poses for a photo during an awards ceremony. (image: Yonhap)

SEOUL, July 19 (Korea Bizwire) – The entire cast of the popular South Korean variety show “Running Man” will meet with their fans in China this fall, the program’s broadcaster said Tuesday.

SBS will organize the fan meetings in five or six cities across China between September and November, the first time the broadcaster has done so since the program launched in the country.

“We organized this fan meeting tour because ‘Running Man’ has been steadily popular in China,” an SBS official said. “We’re currently in the process of choosing the cities.”

The show features popular celebrities, including actor Lee Kwang-soo, comedian Yoo Jae-seok, singer Kim Jong-kook and actress Song Ji-hyo. Divided into teams, they compete to tackle various missions that have been assigned to them.

Since 2014, a Chinese version of the show called “Hurry Up Brothers” has been broadcast on local TV, adding to the popularity of its original version.

“We expect about 10,000 fans to attend each of the meetings,” the official said. “The ‘Running Man’ crew has been working on creating the best content to show their appreciation to their fans.”

Co-produced by China’s Zhejiang TV and SBS, “Hurry Up Brothers” first aired in October 2014. In a country with more than 2,000 TV channels, a 1 percent viewership is considered a barometer of popularity, a rating the show easily surpassed in its first season.

During its second season, viewership rose to 5 percent, while in the second quarter of this year, Season 4 averaged a 3 percent viewership. During the latter period, “Hurry Up Brothers” was the most viewed entertainment program in all of China.

The program’s popularity is thought to have contributed to Zhejiang’s rating as the channel beat its rival Hunan TV in the second quarter of the year to rank No. 1 among Chinese channels for entertainment programs.

The top ad spot for Season 4 of “Hurry Up Brothers” came with a price tag of nearly 150 billion won (US$131 million).