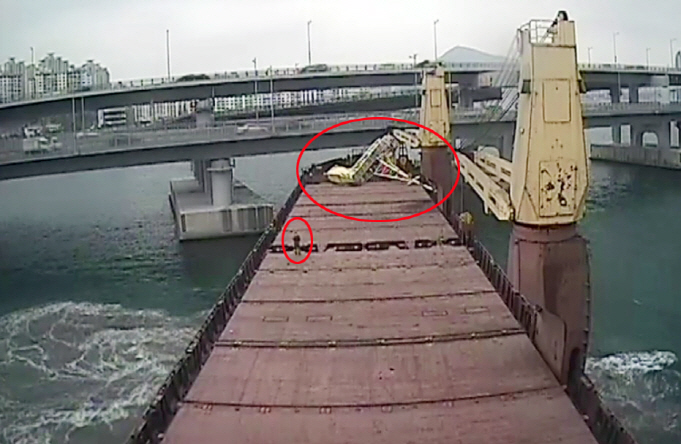 BUSAN, Mar. 27 (Korea Bizwire) — A Russian freighter’s collision with a bridge off the coast of the southern city of Busan late last month occurred as it hastily ran away after ramming a yacht and a barge, the local prosecution said Wednesday.

On Feb. 28, the 5,998-ton Russian freighter Seagrand bumped into the side of Gwangan Bridge, damaging its lower part. The coast guard immediately arrested the ship’s 43-year-old Russian captain, whose identity is being withheld, on charges of operating the vessel while under the influence of alcohol.

Later, the coast guard said the captain had a blood alcohol level of 0.086 percent, well above the legal limit of 0.03 percent. But the captain claimed that he drank after the accident took place.

“Seagrand hit the yacht and barge after the skipper made an abnormal steering order under the influence of alcohol,” the Busan District Prosecutors’ Office, who took over the case, said in announcing the outcome of its additional probe.

The ship had to repeatedly move back and forth little by little to change its course and get out of the narrow Yongho quay, but speedily moved forward and caused the crash into the boats, the prosecution said.

Then the ship bumped into the lower part of the bridge again while trying to get out of the pier, while circling at high speed without any steps to rescue the damaged ships.

“The drunken captain misjudged the rotation distance and angle while attempting to escape from the scene,” the prosecution said.

After the collision with the boats, the skipper falsely answered “No collision” in a communication with the local maritime traffic control center, the prosecution said.

His claim of drinking after the accident was also “a lie,” the prosecution added.

Some 2.84 billion won (US$2.50 million) is likely to be required to repair the damaged bridge.