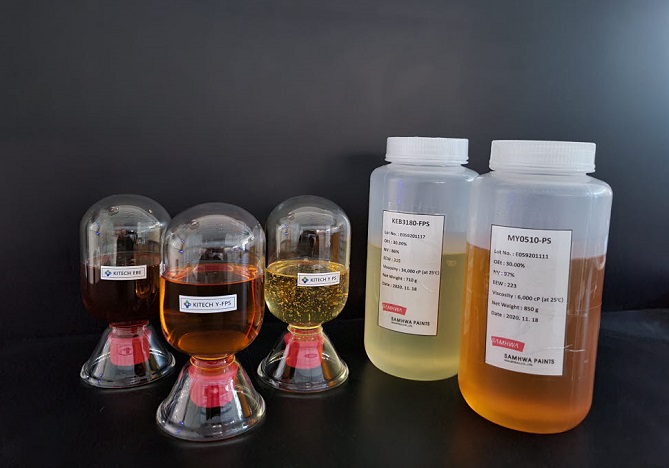 This photo provided by the Korea Institute of Industrial Technology on Dec. 20, 2020, shows epoxy resins used in semiconductor packaging assemblies.

SEOUL, March 23 (Korea Bizwire) — South Korea, home to chipmaking giants such as Samsung Electronics Co. and SK hynix Inc., was the world’s third-largest market for semiconductor materials in 2020, a report showed Tuesday, moving down one spot from a year earlier after posting an under-par industry average growth.

The country’s chip materials market grew 3.9 percent on-year to US$9.23 billion in 2020, according to the report from SEMI, a global industry association representing companies in the electronics design and manufacturing supply chain.

Taiwan, home to the world’s top foundry firm TSMC, topped the market for the eleventh consecutive year at $12.83 billion with a year-on-year increase of 8.2 percent.

China overtook South Korea to occupy the second spot at $9.76 billion, up 12 percent from a year earlier.

The global semiconductor materials market last year grew 4.9 percent on-year to a record $55.3 billion in revenue, according to SEMI.

The semiconductor materials market could expand down the road as the chipmaking industry is expected to increase its equipment spending for fabrication plants.

SEMI projected the worldwide fab equipment spending to expand 15.5 percent this year and 12.2 percent in 2022.