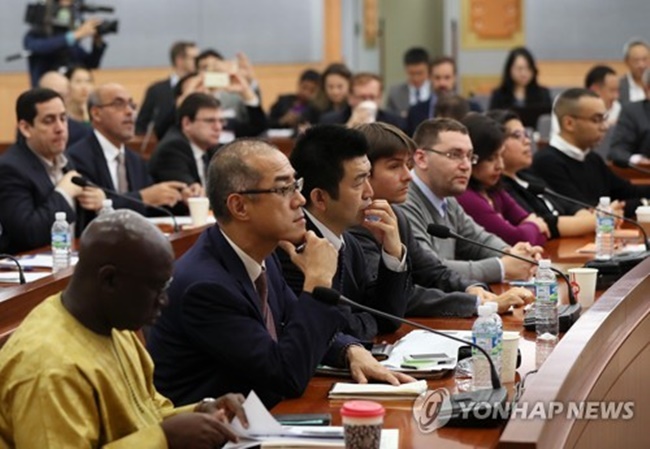 A group of foreign diplomats and business people attend a briefing at the foreign ministry in Seoul on Oct. 20, 2017, about South Korea’s efforts to ensure the safety of the 2018 PyeongChang Winter Olympics and Paralympics. (Image: Yonhap)

SEOUL, Oct. 20 (Korea Bizwire) – South Korea on Friday assured foreign diplomats and executives of foreign companies operating in the country of its efforts to ensure the safety of the 2018 PyeongChang Winter Olympics and Paralympics.

The Ministry of Foreign Affairs briefed around 100 diplomats from embassies and business people on the measures being taken by Seoul in hosting the sports spectacular in a safe way amid heightened tensions after North Korea’s nuclear and missile provocations.

“We are making the utmost efforts to host the PyeongChang Olympics that embodies peace beyond safety,” said Park En-na, the envoy for public diplomacy at the ministry.

Park stressed the country’s efforts to prepare for the Feb. 9-25 event that will be evaluated as the safest-ever Olympics as it places top priority on the safety of the athletes, officials and spectators worldwide who will visit PyeongChang during the Games.

The first-ever Winter Olympics in South Korea are scheduled to be held in the host city of PyeongChang, Gangwon Province, and two other nearby cities — Gangneung and Jeongseon.

During Friday’s briefing, South Korea’s top nuclear envoy Lee Do-hoon spoke to the diplomats and businesspeople about the North Korea nuclear issue and other issues surrounding the Korean Peninsula.