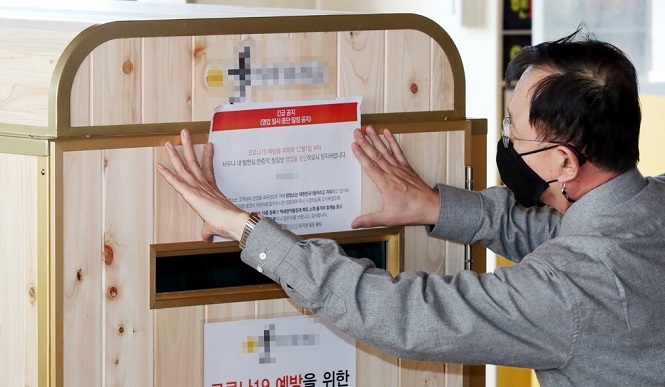 An official puts up a notice banning the use of sauna facilities at a public bath in Incheon, west of Seoul, on Nov. 30, 2020, as the central government toughened social distancing rules until Dec. 7 amid the coronavirus resurgence. (Yonhap)

SEOUL, Nov. 30 (Korea Bizwire) — The daily number of new coronavirus cases in South Korea stayed in the 400 range for the second day in a row Monday due apparently to less testing over the weekend, and health authorities warned that the country is bracing for the “biggest crisis” in the upcoming winter season.

The country added 438 more COVID-19 cases, including 414 local infections, raising the total caseload to 34,201, according to the Korea Disease Control and Prevention Agency (KDCA). It reported three additional coronavirus fatality, bringing the total to 526.

Monday’s figure is down from 581 on Thursday, 555 on Friday, 503 on Saturday and 450 on Sunday, the KDCA said. However, fewer tests are usually carried out on weekends compared with weekdays.

The KDCA warned of a bigger wave of the pandemic during winter, urging people to stay at home and avoid year-end gatherings.

“The reproduction rate for COVID-19 was analyzed to be 1.43 for last week,” KDCA chief Jeong Eun-kyeong told a press conference, meaning that one patient can infect 1.5 people.

Jeong forecast the country could report daily virus cases of between 700 and 1,000 in the next one or two weeks unless the current pace is curbed.

The daily infection tally has stayed in the triple digits since Nov. 8, with the figure hovering above 300 since Nov. 18 except for Monday.

Concerns have mounted since last week over the third wave of infections, as daily new cases peaked to an eight-month high.

On Sunday, the country decided to keep the greater Seoul area under Level 2 social distancing measures in its five-tier system, but it raised antivirus curbs in all other areas to Level 1.5.

Under the tougher distancing measures, saunas and steam-bath rooms in bathhouses will be banned starting Tuesday for a week in the greater Seoul area.

Nine kinds of indoor exercises practiced in groups, including Zumba dance, aerobics and kickboxing, will also be banned starting Tuesday for a week.

To slow the spread of the virus among young people, the government will prohibit hotels, party rooms and other guesthouses from hosting year-end or New Year’s parties that are prone to virus transmission. 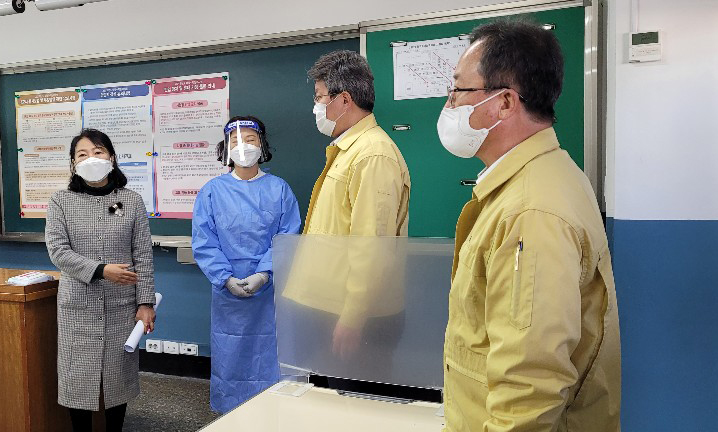 Acting Busan Mayor Byun Seong-wan (2nd from R) inspects a proctor’s quarantine outfit (2nd from L) and a test room that test takers with fever will use during an inspection of a high school in Busan on Nov. 30, 2020, three days ahead of the country’s college entrance examination. (Yonhap)

By region, 158 new virus cases were reported in Seoul, 69 cases in Gyeonggi Province that surrounds the capital and 34 cases in Incheon, west of Seoul. The greater Seoul area is home to around half of the nation’s 51.6 million population.

Other municipalities reported new infections, with the southern port city of Busan adding 52 new cases, sharply up from 21 a day earlier.

Among virus clusters, a dance academy in western Seoul added 13 more cases, bringing the total to 189, while a kids cafe in Yongin, south of Seoul, reported three additional cases, raising the total to 89.

An additional 24 people tested positive in cases traced to a singing class in Gyeongsan, raising the total to 25, the authorities said.

The number of cases connected to a traditional Korean drum class in the southern cities of Busan and Ulsan came to 148, sharply up from 106 a day earlier, it said.

An additional 14 people tested positive in cases traced to a religious facility in Busan, raising the total caseload to 15.

The number of seriously or critically ill COVID-19 patients came to 76 as of midnight, unchanged from the previous day.

The country added 24 imported cases, down from 37 a day earlier, coming mainly from Asian countries, excluding China, the KDCA said.

The authorities also said 61 imported cases detected between Nov. 17 and Nov. 19 were later confirmed to be negative due to an error during the testing process.

The total number of people released from quarantine after making full recoveries stood at 27,625, up 83 from the previous day.