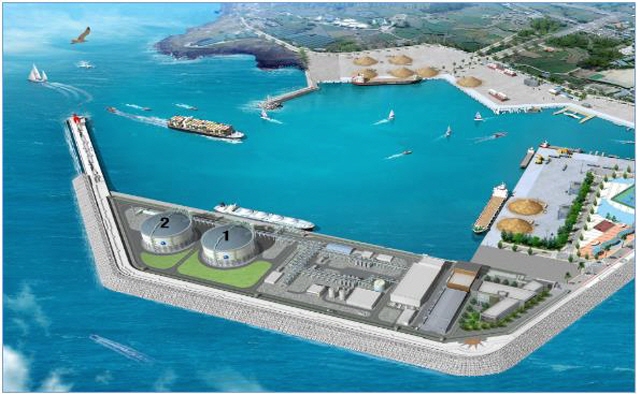 A computer image of a new liquefied natural gas (LNG) storage facility on the southern resort island of Jeju. (image: Ministry of Trade, Industry and Energy)

The project to build the LNG factory on Jeju began in 2007, with 543 billion won (US$460 million) spent on it, according to the Ministry of Trade, Industry and Energy. The construction started in 2012.

The facility is composed of two 45,000-kiloliter storage tanks. It is the fifth LNG storage and distribution facility to be built by the state-run Korea Electric Power Corp. (KEPCO).

The supply to Jeju households is expected to begin in March 2020.

“Among 17 major cities and provinces across the country, Jeju was the only area without the supply of LNG,” a ministry official said. “The completion marks a milestone for the country’s energy project.”

The new facility will pave the way for a stable supply of electricity for Jeju residents, which will eventually lead to the vitalization of the local economy, the ministry said.

“Jeju has been making investments toward the future energy industry, including electric cars and renewable sources,” Industry Minister Sung Yun-mo said during the completion ceremony.

“The government will spare no efforts to help the facility become a symbol of the future energy industry and a model for sustainable growth.”