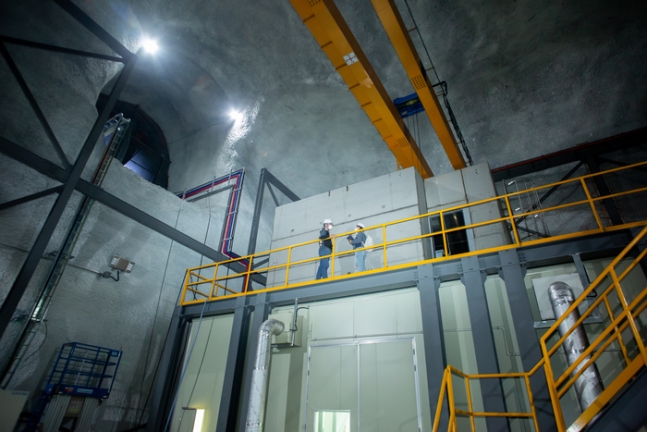 This photo provided by the Institute of Basic Science shows a laboratory at the Yemi Lab in Jeongseon County, Gangwon Province.

SEOUL, Oct. 5 (Korea Bizwire) – South Korea’s state research institute said Wednesday that it has built the country’s deepest underground research facility in a move to unlock the mysteries of the universe.

The lab encompasses 3,000 square meters in area, which could house more than 10 types of experimental research at the same time.

The 31 billion-won (US$21.8 million) project, which began in 2017, is aimed at carrying out studies on the creation of the universe and its composition through detecting “dark matter” and measuring the mass of “neutrino.”

A number of researchers have made effort to detect and measure the properties of the weakly interacting massive particles, a hypothesis about what dark matter could consist of, but have come up with lower-than-expected outcomes so far.

A neutrino is a very small electrically neutral particle that is part of elementary fermions consisting of the fundamental forces of the universe.

Most of the essential nature of neutrinos has also remained unknown, and the IBS researchers will carry out studies on the issue at Yemi Lab.

The IBS said the underground facility will help its researchers detect the signals of these little-known materials without interfering background noise or rays from outside.