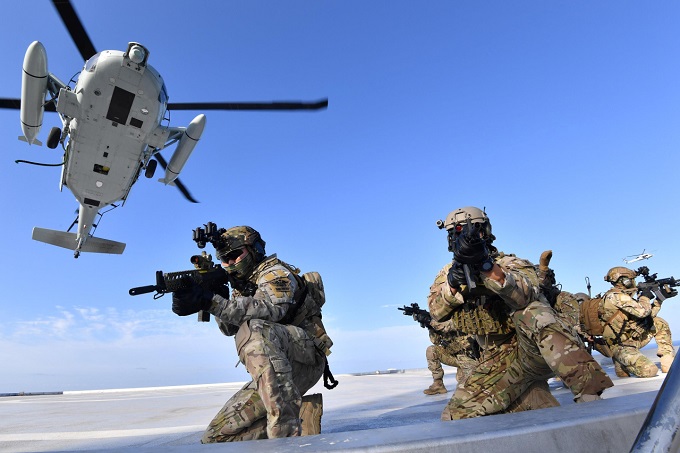 In the Aug. 25, 2019, file photo, service members carry out a military drill on South Korea’s easternmost islets of Dokdo in the East Sea to deter trespassers. (Yonhap)

The country’s military staged the drills to ensure their readiness to fend off potential foreign infiltrations to the rocky outcroppings, the source said without elaborating on the exact date and the size of the participating troops.

South Korea is said to have not carried out any landing drills on the islets, with the maneuvers having proceeded in waters and through computer simulation.

Seoul’s defense ministry and the Navy refused to confirm whether the drills took place.

Japan lodged a strong protest against South Korea through diplomatic channels after learning about the drills, with Tokyo’s foreign ministry saying it cannot accept the drills and finds them “extremely regrettable,” according to reports from NHK and Kyodo News.

The latest drills came as Washington has been steadily striving to bring its key Asian allies, Seoul and Tokyo, closer together amid its drive to counter China’s growing assertiveness.

In particular, the three countries have been coordinating over the idea of holding trilateral defense ministerial talks likely next month to reinforce their security cooperation.

South Korea launched the Dokdo drills in 1986. Since 2003, it has conducted them twice a year.

In June, the country staged this year’s first Dokdo drills. In protest, Tokyo called off a plan to hold a pull-aside meeting between President Moon Jae-in and then Japanese Prime Minister Yoshihide Suga on the margins of the Group of Seven gathering in Britain in the same month.

Dokdo has long been a recurring source of tension between the two neighbors, as Tokyo continues to make the sovereignty claims in its policy papers, public statements and school textbooks.

South Korea has been in effective control of Dokdo, with a small police detachment, since its liberation from Japan’s 1910-45 colonial rule.