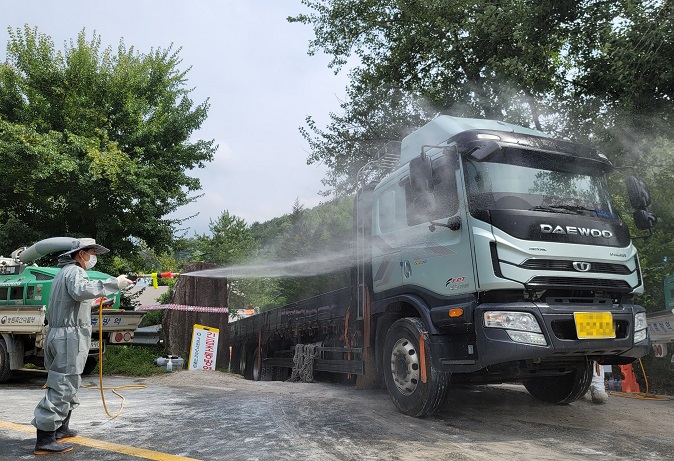 A quarantine official disinfects a livestock vehicle near a pig farm in Hongcheon, Gangwon Province, northeastern South Korea, on Aug. 26, 2021, after another case of African swine fever was confirmed there. (Yonhap)

SEOUL, May 27 (Korea Bizwire) — South Korea has slaughtered more than 1,000 pigs to try to stem the spread of African swine fever (ASF) following its first outbreak of the virus this year, the agriculture ministry said Friday.

The animal disease broke out at a pig farm in Hongcheon, a county located about 100 kilometers east of Seoul, on Thursday. It marked the nation’s first case since Oct. 5 last year, according to the Ministry of Agriculture, Food and Rural Affairs.

Quarantine officials completed the culling of about 1,175 pigs at the farm on Friday, the ministry said.

Prime Minister Han Duck-soo instructed officials to fully implement quarantine steps by “mobilizing all resources available” to contain the spread and to figure out the exact infection route.

He also called for intensifying operations to hunt down wild boars and search for affected animals, and ordered existed fences to be checked and more fences to be installed to stop migration.

ASF does not affect humans but is deadly to pigs. There is currently no vaccine or cure for the disease.

The fatal animal disease dealt a harsh blow to the South Korean pig industry in 2019, when quarantine officials slaughtered more than 150,000 pigs.

Meanwhile, the ministry said that the current ASF situation is not likely to affect the country’s pork supply, though it vowed to push for measures to stabilize the price amid inflation and the surge in global animal fodder prices.