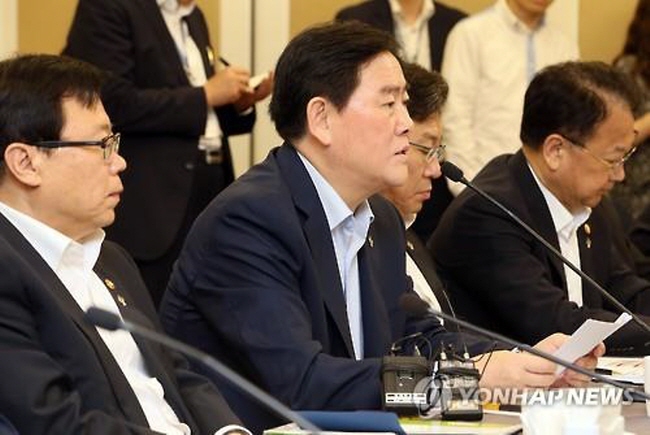 The revised estimate represents a drop from the 3.8 percent gain predicted late last year and is lower than the 3.3 percent growth reached in 2014. For 2016, the finance ministry predicted the economy will grow 3.5 percent.

Announcing its second-half economy management plan, the ministry attributed the downgrade to the sluggishness of exports and consumer spending, the country’s key growth engines.’

South Korea’s exports contracted 5.7 percent on-year in the first five months of 2015. Consumer spending has been hit hard by the unexpected outbreak of MERS after showing budding signs of recovery recently.

“There are factors that can push up growth, including low interest rates that can reduce the debt burden, but anticipated U.S. rate hikes and the MERS scare are adding to downside risks,” the ministry said. “The MERS outbreak could pare 0.2 to 0.3 percentage point off annual economic growth.”

To counter such developments, the government is moving to inject more than 15 trillion won (US$13.5 billion) into the economy by asking parliament for an extra budget and by utilizing various state-run funds.

The exact size of the supplementary budget will be determined after more consultation with lawmakers. The extra money will make it possible for the government to push for expansionary policy measures, inject sufficient capital into the market and implement programs to help create jobs.

The economy’s rebound in the second half will hinge on the effectiveness of ongoing efforts to quickly contain the respiratory illness that was first confirmed on May 20, it said.

As of early Thursday, South Korea had 180 confirmed MERS cases with the death toll rising to 29 and more than 2,600 people in isolation as a precautionary measure.

“The economy is being weighed down by MERS, which has seriously hurt consumption and the service sector,” Finance Minister Choi Kyung-hwan said in a press conference in Seoul. “Even if the situation is put under control quickly, the economy will feel the ill effects for some time to come.”

While the country is facing tough challenges, all available resources will be used to revive growth, support exports and create jobs, he said.

“The government will strive to maintain growth in the 3 percent range this year,” he vowed.

On the supplementary budget issue, Choi, who doubles as deputy prime minister for economic affairs, said an agreement has been reached with the ruling Saenuri Party on the need to inject money into the economy, and a formal request will be sent to the Assembly in early July. He, however, said more time is needed to review how much money will be requested.

Choi said the government will take steps to use leftover money from last year’s budget, with shortfalls to be made by issuing state bonds.

Besides MERS, the government pledged it will keep close tabs on rising household debt and encourage corporate restructuring that could reduce risks to the economy down the line.

Lee Chan-woo, director general of the economic policy bureau, said measures will be taken to push forward sweeping reforms in labor, finance, the public sector and education, which is critical for South Korea’s sustainable growth.

The ministry expected the country’s consumer prices to grow just 0.7 percent on-year in 2015, down from a previous estimate of 2 percent, saying that consumer inflation will likely reach 1.3 percent in 2016.

Private consumption is projected to rise 2.1 percent on-year in 2015, with corporate capital spending and construction investment likely to advance 5.6 percent and 4.5 percent, respectively.

On employment, the ministry forecast some 400,000 new jobs will be created this year, down from its earlier estimate of 450,000, with the number expected to reach 430,000 next year.

The ministry also predicted the country’s current account surplus to widen to US$94 billion this year from $89.2 billion in 2014 as imports fall more sharply than exports. The ministry had earlier forecast a surplus of $82 billion for 2015.

South Korea’s exports are expected to contract 1.5 percent on-year in 2015, with imports likely to drop 7 percent due to a sharp drop in global commodities prices, the ministry said.

For 2016, the ministry predicted that exports will likely grow 5.4 percent on-year with imports rising 8.3 percent, resulting in a current account surplus of $88 billion.