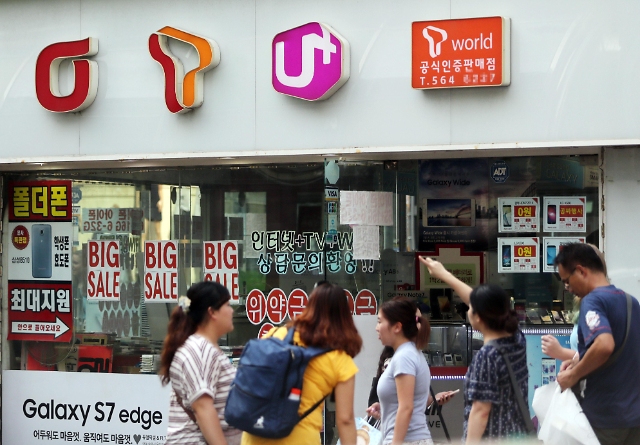 According to sources close to the industry on Tuesday, KT is expected to be the last among the three major mobile carriers in South Korea to revise mobile phone plans, including increased data usage for premium plan users. (Image: Yonhap)

SEOUL, March 7 (Korea Bizwire) — Major South Korean telecom companies LG Uplus and SKT have revised their mobile phone plans to boost their user base, while KT has been rumored to follow suit.

According to sources close to the industry on Tuesday, KT is expected to be the last among the three major mobile carriers in South Korea to revise mobile phone plans, including increased data usage for premium plan users.

KT has denied the claims, despite growing speculation that it would follow in the footsteps of the other two in a move to offset pressure from the government and better prepare for the commercialization of 5G networks.

LG Uplus made the first move last month, introducing an unlimited 4G LTE data plan for the first time in the country. Priced at 88,000 won, the plan also comes with 40GB of data that can be shared between family members.

SKT has also announced plans for major changes to its rate plans, including discounts for international roaming and a reduced cancellation fee for users who fulfill half of their contract period.

Sources close to the industry say the latest moves are triggered by concerns over the profitability of 5G services among mobile carriers, as well as growing competition to secure a user base before the commercialization of 5G.

“It’s a simple market principle that prices go down before a new product is introduced. Given the consumer trend of increased data usage, introducing an unlimited premium data plan could be a win-win situation for increased average revenue per user and extended benefits for customers,” says researcher Kim Hee-jae at Daishin Securities.

Pressure from the administration to reduce phone bills also played a major role, as the government previously said sufficient initiative from the mobile carriers could see plans for legislation ‘reconsidered’.

Some say, however, that mobile plan revisions are not enough to address the underlying issues facing the telecom industry.

“Mobile carrier reforms turn a blind eye to calls for more affordable rate plans and the abolition of the minimum monthly fee. Most of the benefits are only for premium users and too insignificant for most customers to enjoy,” said Kim Joo-ho, a senior member at People’s Solidarity for Participatory Democracy.