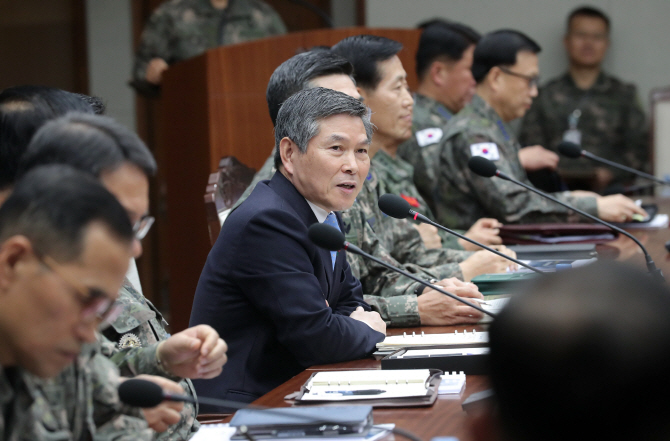 Defense Minister Jeong Kyeong-doo speaks during a meeting of top commanders in Seoul on Dec. 4, 2019. (Yonhap)

SEOUL, Dec. 4 (Korea Bizwire) — South Korea decided Wednesday to push in earnest for the development of a home-grown long-range surface-to-air missile (L-SAM) after years of research into the project, the arms procurement agency said.

South Korea has been working to develop the long-range ground-based interceptor since 2014 as part of efforts to beef up its air defense capabilities in the face of persistent threats from North Korea.

As a key element of the Korea Air and Missile Defense (KAMD), the interceptor is designed to shoot down ballistic missiles at an altitude of around 50 to 60 kilometers in their terminal phase.

After holding a meeting presided over by Defense Minister Jeong Kyeong-doo, the defense project promotion committee decided to begin the systems development project worth around 970 billion won (US$812.74 million) after the yearslong exploratory development process, according to the Defense Acquisition Program Administration (DAPA).

The state-run Agency for Defense Development (ADD), which is in charge of the project, will make contracts with several private defense companies this month, it added.

If the development is completed around 2024 as scheduled, the missile is expected to be put into operation by approximately 2028, according to officials.

During the meeting, the committee also approved the plan to develop a 3,000-ton Batch-III Ulsan-class frigate in earnest starting next year.

South Korea decided to build the advanced vessel in 2015 to replace aging frigates and has carried out a preliminary development process.

The government seeks to complete its development by around 2024, according to DAPA.