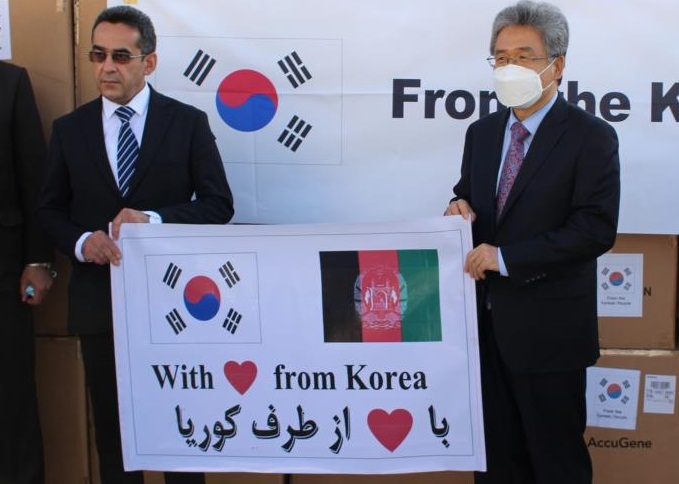 Rhee Zha-hyoung (R), South Korean ambassador to Afghanistan, and Ahmad Jawad Osmani, acting Afghan health minister, pose at a handoff ceremony held at Hamid Karzai International Airport in Kabul on Sept. 19, 2020, for some 40,000 COVID-19 test kits the South Korean government donated to Afghanistan. This photo was provided by the South Korean embassy in the country.

The some 40,000 test kits of the real-time polymerase chain reaction (RT-PCR) type were delivered on Saturday at Hamid Karzai International Airport in Kabul, according to the South Korean embassy in Afghanistan.

Rhee explained that the South Korean people fully sympathize with the pain and troubles the Afghan people have experienced from the country’s decades-long civil wars and conflicts.

Osmani thanked South Korea for the donation and promised to use the kits transparently, according to diplomats.

The number of total confirmed COVID-19 cases in Afghanistan stands at some 39,000 as of Sunday, according to data from Worldometers.

The actual figure is feared to be much higher considering that the country has only conducted around 108,000 tests out of a population of 37.6 million.