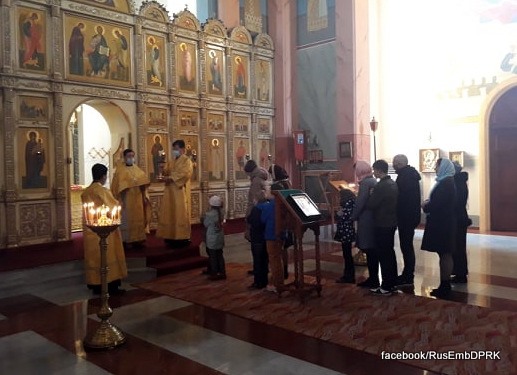 Priests wear masks during a Mass service at the Holy Trinity Church in Pyongyang in this photo captured from the Facebook page of the Russian Embassy in Pyongyang on March 17, 2020.

VLADIVOSTOK, March 17 (Korea Bizwire) — Russia’s Embassy in North Korea has released photos showing all priests and worshippers wearing masks during a recent Mass service at a Russian Orthodox church in Pyongyang in an indication that the country is on high alert for the coronavirus.

“The service was carried out in compliance with all necessary precautions … the parishioners who were quarantined and those attending the mass wore masks and the rituals were performed in sanitary conditions,” the embassy said in a post Monday on its official Facebook page.

The Mass was held a day earlier at Holy Trinity Church, the first Russian Orthodox Church to be built in Pyongyang.

North Korea has not reported any case of COVID-19 virus infection, but it has called for nationwide efforts to prevent the virus from breaking out on its soil through intensified border controls and a tightened quarantine process.

Concerns are lingering that North Korea could be vulnerable as it shares a long and porous border with China, and lacks key medical supplies and the infrastructure to test and treat infected people.