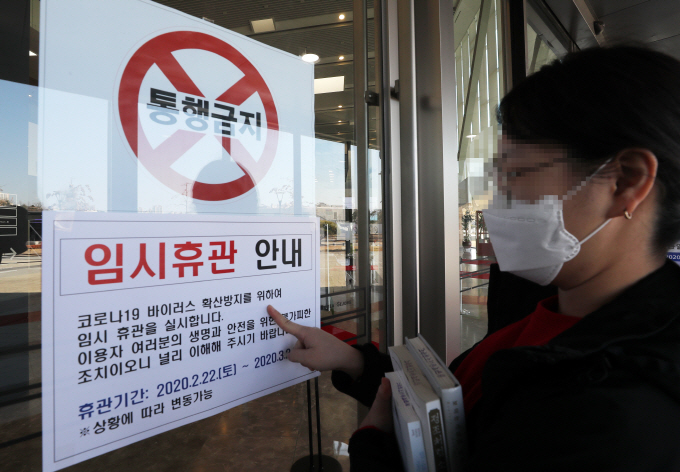 A visitor reads a notice of closure on a gate of the National Library of Korea, Sejong, on Feb. 23, 2020. (Yonhap)

The Ministry of Culture, Sports and Tourism said 36 state-run museums, libraries and theaters across the country will remain closed for two weeks longer than previously announced till late March as part of efforts to prevent the spread of COVID-19.

The culture ministry initially suspended operations of those state-run cultural facilities last week for a two-week period till this coming Sunday following a spike in coronavirus infections.

The latest extension will put the cultural facilities out of service till March 22 while the country fights to contain the spread of virus infections.

In addition, five national performing art theaters such as the National Gugak Center and the National Theater of Korea, as well as seven state art companies including the Korean National Ballet and the Korea National Opera, will remain closed or suspend shows till March 22.

“The ministry will determine whether and when to reopen the state cultural and art facilities after March 23 after studying the development of the coronavirus spread,” a ministry official said.