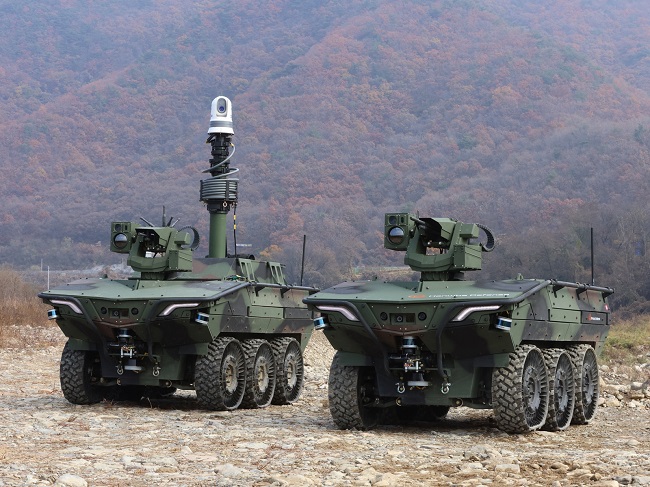 The company showcased key capabilities of the military vehicle, Arion-SMET, at Camp Humphreys in Pyeongtaek, 65 kilometers south of Seoul — the first such demonstration by a local firm at a U.S. Forces Korea (USFK) base.

It is an upgraded version of an infantry combat support vehicle that Hanwha Aerospace developed in 2019 under a military-civilian cooperation project.

The demonstration came as the company is seeking to create a foothold in the U.S. market.

During the event, the 2.95-meter-long, 1.5-meter-wide vehicle performed a series of functions, including driving autonomously, avoiding obstacles, returning to a home base autonomously, sensing gunshots and transporting casualties.

Brig. Gen. Mark A. Holler, the deputy commanding general of the Eighth U.S. Army in charge of operations, and other key USFK officials attended the event.

The vehicle has been designed for multiple purposes, such as transporting military supplies and injured troops as well as conducting surveillance and remote search operations, with an aim to reduce human damage in a high-risk combat zone.

It can travel 43 kilometers per hour on a paved road and 34 km per hour on an unpaved one. When charged once, it can run a distance of 100 km or longer.