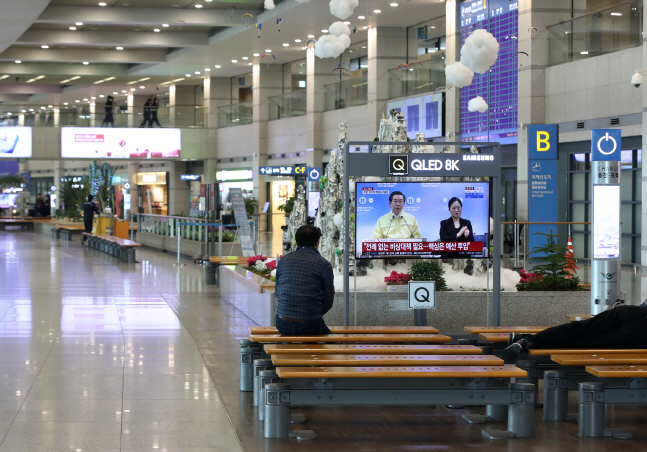 This photo, taken on March 18, 2020, shows Incheon international Airport, west of Seoul, nearly deserted amid a global spread of the new coronavirus. (Yonhap)

SEOUL, May 21 (Korea Bizwire) – South Korea on Thursday extended its “special travel advisory” by another month, urging citizens to refrain from going abroad as the coronavirus pandemic is still affecting many parts of the world, the foreign ministry said.

The government first issued the special advisory on March 23 on all countries and territories over the spread of the virus outbreak.

The advisory urges South Koreans to cancel or postpone overseas trips and also calls for citizens staying and traveling abroad to take extra caution for their safety.

The special advisory was extended last month and will now be maintained up till June 19, with the advisory to be lifted automatically the following day, the foreign ministry said in a release.

The ministry said its decision is based on the fact that the global spread of the virus is continuing and many countries are still applying entry restrictions on foreigners.

It also noted that commercial airlines around the world have suspended flight operations.

A special advisory is issued by the government in the event of an urgent and short-term danger to travelers, when the situation requires more than a travel restraint but is not so dangerous as to require a withdrawal recommendation.

It can be maintained for up to 90 days.