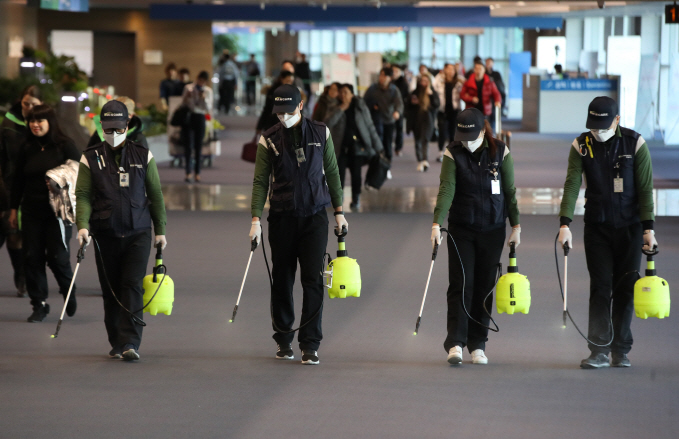 Quarantine workers spray disinfectant at Incheon International Airport, west of Seoul, on Jan. 21, 2020, to prevent the advance of a new strain of coronavirus now spreading in China and other parts of Asia. (Yonhap)

SEOUL, Jan. 23 (Korea Bizwire) — South Korea’s public health authorities on Thursday remained on alert and said that every effort will be made to prevent the spread of the Wuhan coronavirus during the upcoming four-day Lunar New Year holiday, with the country’s citizens advised not to visit the central Chinese city at the epicenter of the disease.

The country reported its first confirmed case of the new coronavirus on Monday when a Chinese resident who arrived at Incheon International Airport, the country’s main gateway, on Sunday tested positive for the virus.

Airports across the nation have been ratcheting up their monitoring and checking of passengers from China and other countries for signs of illness, with local authorities accelerating quarantine efforts to contain the virus during the busy Lunar New Year travel season.

Citizens should follow strict personal hygiene rules whether they are in the country or traveling abroad, especially since there is expected to be an influx of Chinese tourists coming to the South Korea during the holiday period, according to the Korea Centers for Disease Control and Prevention (KCDC).

The Ministry of the Interior and Safety too issued a text message alert calling on citizens to wash their hands frequently, cover their mouths when coughing and if they have respiratory problems wear a mask.

Common symptoms of the coronavirus, thought to have originated in Wuhan, central China, include fever, sore throat and breathing difficulties.

Lunar New Year is celebrated by both Korean and Chinese people. The traditional holiday, which kicks off Friday, will see increased movement within the country and abroad, potentially exposing more people to the virus, the center said.

China said Thursday that the virus had killed 17 so far, with 616 people confirmed to be infected, amid concerns that the pneumonia-like illness is spreading quickly and widely.

Of those in quarantine, 95 are in critical condition, raising fears of more deaths.

Beijing pledged on Wednesday to pool all of its resources to contain the further spread of the disease, especially since many people have time off till the end of the month so they can visit family and friends.

It has closed off three cities near Wuhan to control the spread of the disease and announced it will cancel major New Year celebrations across the country to reduce the risk of healthy people coming into contact with the new coronavirus.

Japan, Taiwan, Thailand and the United States have all confirmed cases of the disease, with media reports indicating a case in Singapore. 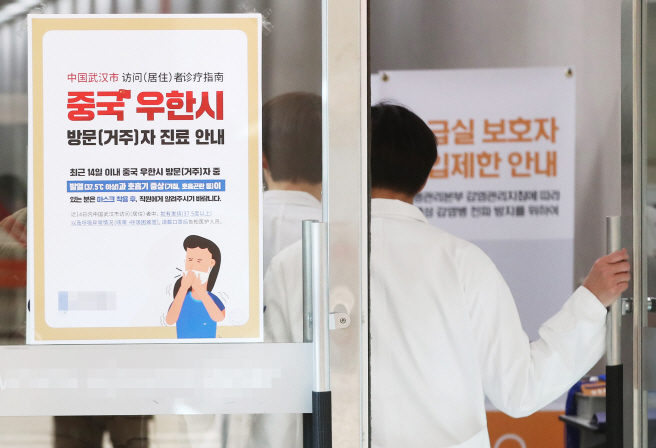 This photo taken Jan. 21, 2020, shows a notice placed on a door in a hospital in Gyeonggi Province warning people about the symptoms of the Wuhan coronavirus. (Yonhap)

The foreign ministry applied the alert level of “restraint” to Wuhan, the third highest in the four-tier travel warning system, while issuing the lowest alert level of “caution” for other areas in China’s Hubei Province.

The ministry also urged South Korean citizens currently in Wuhan to take extra care to ensure their health and safety.

Korean Air Lines Co., South Korea’s national flag carrier, said Thursday it will suspend its flights to Wuhan by the end of this month.

The move comes after the Chinese authorities made a decision to not allow most inbound and outbound flights on domestic and international routes at the airport there starting Friday.

The KCDC the day before said that four suspected cases have tested negative for the Wuhan coronavirus and that none of the 21 people who showed symptoms so far reported in the country have been linked to the virus.

The new coronavirus, first reported in China late last year, was originally believed to be passed to humans from animals but is now known to be transmissible person to person, although victims may be contracting the virus by coming in contact with saliva and other bodily fluids rather than through airborne factors.

The KCDC said local health experts will be sent to China so they can better look after South Korean citizens living there.