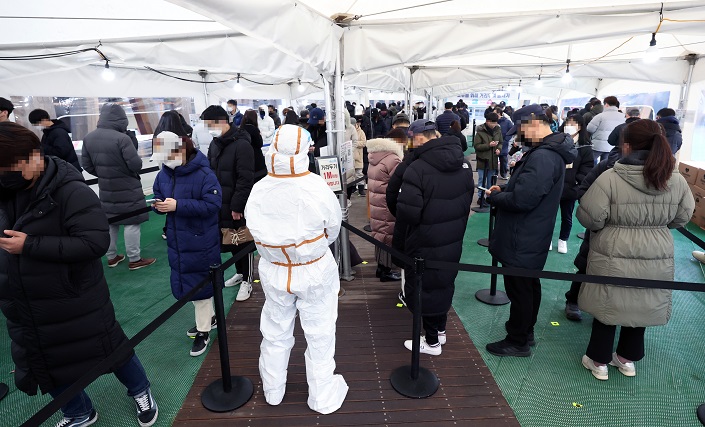 People wait in line to take COVID-19 tests at a makeshift testing booth in Seoul’s eastern district of Songpa on Jan. 26, 2022. (Yonhap)

SEOUL, Jan. 26 (Korea Bizwire) — South Korea’s daily COVID-19 infections reached a grim milestone of over 13,000 on Wednesday, with yet another all-time high expected amid deepening concerns over the highly transmissible omicron variant.

The latest count is a big jump from Tuesday, when daily infections hit a record of 8,571 since the country reported the first COVID-19 case on Jan. 20, 2020. The daily figures have spiked from around 3,800 to over 7,500 since early last week.

The number of critically ill COVID-19 patients dropped by seven to 385 from the previous day.

As of 9 p.m. Wednesday, the country had reported 12,410 new COVID-19 cases, up sharply compared to the 9,218 tally from the same time a day ago, according to health authorities and local governments.

South Korea began to implement a new virus response system Wednesday to tackle the omicron variant, with a focus on minimizing critical cases and deaths, and preventing an overload and collapse of the medical system.

Under the regime, local hospitals and clinics will administer tests and treat patients, and rapid antigen tests will replace polymerase chain reaction tests at testing sites, except for those aged over 60 or high-risk groups.

“The spike in infections is definitely a point of concern, but we need to interpret the omicron crisis in terms of critical cases, deaths and medical system capacity, rather than the daily count itself,” Sohn Young-rae, a health official, said in a regular briefing.

He asked the public to not feel too anxious about the spike in the daily figure, saying the current virus response system is capable of handling the outbreak. 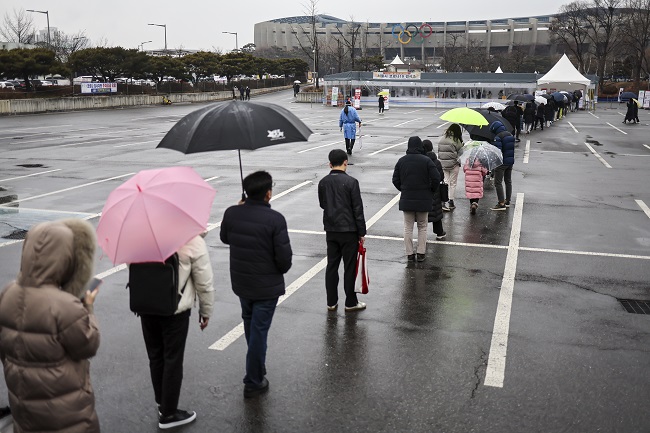 People wait in line to get tested for COVID-19 at a makeshift testing booth set up at a parking lot of the Jamsil Olympic Stadium in Seoul’s eastern district of Songpa, on Jan. 25, 2022. (Yonhap)

The system will initially apply in four areas seeing a surge in omicron cases — the southwestern city of Gwangju, South Jeolla Province, and the cities of Pyeongtaek and Anseong in Gyeonggi Province.

Starting Saturday, the system will expand nationwide, with the introduction of rapid antigen tests at 256 testing sites across the country.

The quarantine and at-home treatment period for vaccinated COVID-19 patients has been cut down to seven days from 10.

A vaccinated person who comes into close contact with a COVID-19 patient won’t have to quarantine but needs to take a PCR test about a week after the initial contact.

Health authorities have warned the infections could surge to five-digit figures in the coming weeks, possibly topping 30,000 a day next month, should the current pace of the omicron spread continue.

The omicron variant became the new dominant COVID-19 virus strain in South Korea, 52 days after the first such case was reported.

Of the locally transmitted cases Wednesday, Gyeonggi Province that surrounds Seoul reported 4,184 new COVID-19 cases, followed by Seoul with 3,110 and the western port city of Incheon at 860.

As of Wednesday, 25.78 million people, or 50.3 percent of the country’s 52 million population, had received booster shots, the KDCA said. The number of fully vaccinated people came to 43.87 million people, accounting for 85.5 percent.