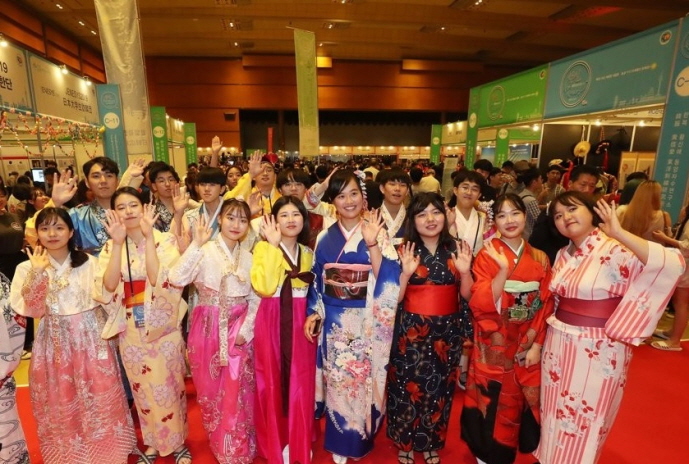 South Korean and Japanese citizens pose for a picture during the Korea-Japan Culture Festival 2019 held in Seoul on Sept. 1, 2019. (Yonhap)

SEOUL, Sept. 1 (Korea Bizwire) — Unabated by escalating diplomatic and trade rows, South Korean and Japanese citizens gathered in Seoul on Sunday to take part in an annual festival designed to share their cultures and facilitate exchanges.

The 15th Korea-Japan Culture Festival 2019 was held at the Convention and Exhibition Center (COEX) in southern Seoul, where visitors had the chance to participate in diverse programs, such as enjoying traditional attire and games.

Tensions were palpable when senior diplomats of the two countries met on the sidelines of the event.

Lee also expressed “strong regrets” over Tokyo’s export curbs against South Korea and renewed calls for it to promptly retract them, according to Seoul’s foreign ministry.

But the two sides shared the need for continued communication and consultations between the two countries’ diplomatic authorities to find a resolution to their row.

As the diplomatic row continued unabated, Seoul decided last month to end the military pact seen as a rare case of bilateral security cooperation with Japan and a platform to promote trilateral defense collaboration involving the two countries’ mutual ally, the United States.

Citizens, for their part, have launched a boycott campaign against trips to Japan, as well as against Japanese products.

But there have been growing voices for continuing their exchanges.

One of the major festivals between the two neighbors, the annual cultural event was first launched in 2005 and has served as a venue to facilitate their interaction and cultural exchanges.

The same festival has taken place in Japan since 2009.