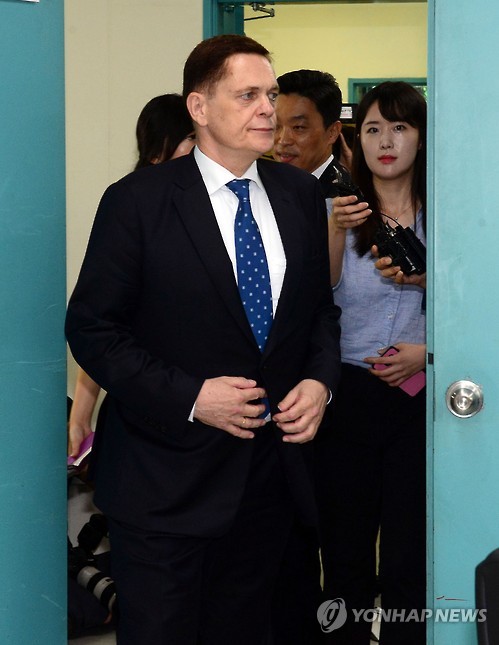 Johannes Tamer, CEO of Audi Volkswagen Korea, attends a public hearing on the carmaker’s emissions scandal at the National Institute of Environmental Research in Incheon, west of Seoul, on July 25, 2016. (image: Yonhap)

SEOUL, July 25 (Korea Bizwire) – South Korea’s government held a hearing on German carmaker Volkswagen’s emissions scandal Monday before finalizing a decision that can revoke the certifications of dozens of its vehicle models implicated in the scandal.

The Ministry of Environment conducted the hearing at the National Institute of Environmental Research (NIER) in Incheon, west of Seoul, which was attended by Johannes Thammer, the chief of the automaker’s South Korean unit.

Earlier this month the ministry said it might revoke the certifications of 79 vehicle models of Audi Volkswagen Korea that are suspected of having obtained local clearance with faked documents about their noise level, fuel efficiency and emissions.

The meeting, hosted by the ministry, is aimed at giving the carmaker a chance to explain its actions before Seoul makes a decision.

On Friday, the carmaker said it has decided to voluntarily suspend sales of the problematic vehicles starting this week.

A Volkswagen Korea executive has already been indicted on various charges that include forgery and a violation of the local Clean Air Conservation Act.

The ministry said it will finalize the decision by Friday.