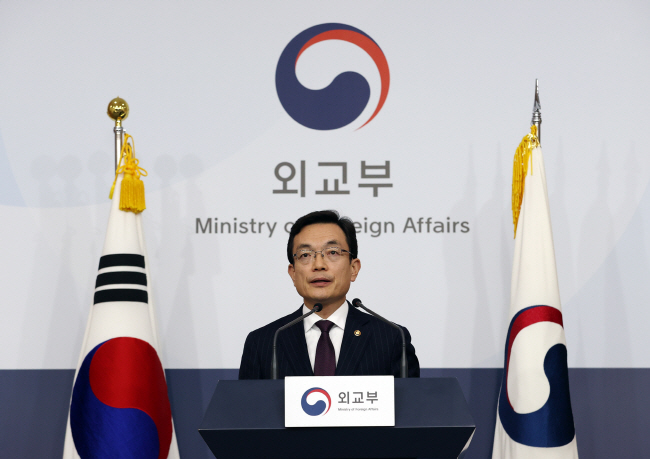 First Vice Foreign Minister Cho Sei-young announces a plan to suspend a visa-free entry program for Japan during a press conference at the foreign ministry in Seoul on March 6, 2020. (Yonhap)

Tokyo suspended its visa waiver program for South Koreans and started asking them to stay at designated facilities for two weeks and refraining from using public transportation.

Moreover, it allows flights from Korea to land only in Narita Airport near Tokyo and Osaka’s Kansai Airport.

In a tit-for-tat response to Tokyo’s entry restrictions, Seoul halted a 90-day visa-free entry program for Japanese on Monday.

It also imposed special entry procedures that subject Japanese to temperature checks, health documentations and other paperwork at airports.

Such restrictions came as the two countries are still mired in a dispute over Japan’s export curbs, which South Korea sees as political retaliation for 2018 top court rulings here that ordered Japanese firms to compensate victims of wartime forced labor.

“With the countries still embroiled in the row over the forced labor issue, their entry restrictions are like adding fuel to the already flammable, fragile relationship. Obviously, not a good sign for their reconciliation,” Nam Chang-hee, professor of international politics at Inha University, said.

“The virus is feared to be on the cusp of growing into a pandemic, and this calls for South Korea and Japan to cooperate in stemming the virus,” he added.

Seoul has defended its immigration control measures against Tokyo as “restrained and principled,” stressing it did not go as far as to request a 14-day quarantine for Japanese or allow flights from Japan to touch down only at limited airports.

Tokyo’s entry restrictions irked South Koreans, as Seoul claims that they came without prior consultations or notification and despite its repeated calls to refrain from excessively restrictive measures against South Koreans.

While decrying Japan’s restrictions as “unreasonable, unscientific and unfriendly,” Seoul officials even raised questions behind Tokyo’s motivations behind the measures.

Observers noted that Tokyo’s entry curbs came as Japanese Prime Minister Shinzo Abe faced public criticism over his handling of the COVID-19 outbreaks, suffered a diplomatic setback due to the delay of Chinese President Xi Jinping’s trip to Tokyo, initially slated for April, and a pushback from parents scrambling to find child care due to a decision to close schools.

After Japan’s restrictions took effect, South Korea’s embassy in Tokyo and its consulate general in Osaka sent its staff to Narita and Kansai Airports, respectively, to help its citizens.

In the morning, three Koreans, including one student, arrived at the airports and went through simple quarantine procedures without particular difficulties, a Seoul official said.

South Koreans flying in from their country are now asked to stay at their homes in Japan or at hotel rooms they have reserved for two weeks.

A senior U.N. health agency official is concerned by the escalation in tensions between South Korea and Japan.

“It’s very, very important that people understand that these types of restrictions are not helping,” Michael Ryan, the executive director of the Word Heath Organization’s Health Emergencies Program, told reporters Friday, voicing concerns about “political spats” between the two countries. 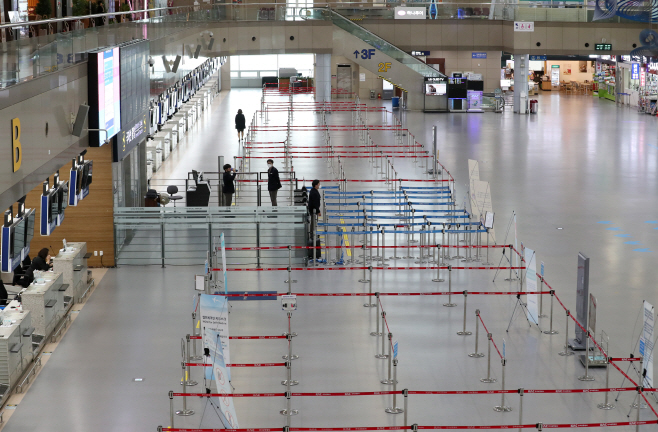 The departure lobby of Gimhae airport in the southeastern port city of Busan is deserted on March 9, 2020. (Yonhap)

The entry restrictions put a damper on the budding efforts by Seoul and Tokyo to improve their ties under pressure from the United States that has been prodding its Asian allies to stand united in the face of China’s growing assertiveness and lingering threats from North Korea.

In particular, the restrictions are likely to affect both countries’ tourism already constricted by travelers hesitating to visit the virus-hit countries. Last year, 5.58 million Koreans visited Japan, while 3.27 million Japanese traveled to Korea.

Growing tensions could also pose a challenge to efforts to keep up cooperation in tackling sensitive issues, such as Japan’s wartime forced labor and its export control measures against South Korean firms.

Tokyo has long argued that all reparation issues stemming from its 1910-45 colonization of the Korean Peninsula were settled in a 1965 state-to-state treaty that normalized bilateral relations.

Based on this claim, it has rejected the talk of any compensation for forced labor victims.

The friction between the two countries could also influence Seoul’s consideration over whether to continue the temporary suspension of its August decision to end a bilateral military intelligence-sharing pact with Tokyo.

In an angry reaction to Japan’s export curbs, Seoul announced the decision not to renew the General Security of Military Information Agreement (GSOMIA). But in November, it suspended the decision amid U.S. pressure against its termination.

Seoul’s entry restrictions against Japanese, albeit based on what it calls the principle of reciprocity, raised doubts over why it does not take similar steps against China that has quarantined hundreds of South Koreans over concerns about the novel virus.

Seoul officials brushed aside the doubts, saying it has made its quarantine and immigration control decisions based on “transparency, openness and democratic procedures.”

They also pointed out that Seoul has already taken due steps, such as imposing special entry procedures for travelers from China.