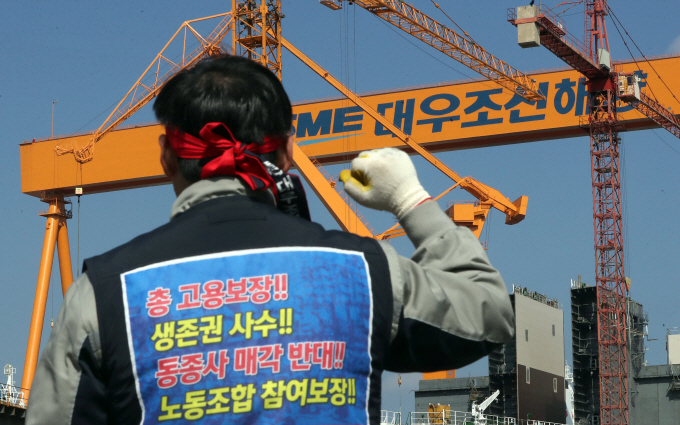 Many of the 250,000 residents of Geoje have either worked for Daewoo or done businesses with the company. The sale of Daewoo to Hyundai Heavy Industries Co., therefore, is causing a lot of anxiety.

Almost all of the 70 local organizations invited by city officials were present at the meeting.

“As soon as we thought we had overcome the side effects of restructuring, the Korea Development Bank now plans to turn Daewoo Shipbuilding over to Hyundai Heavy Industries,” said Byun Kwang-yong, the mayor of Geoje.

“Members of the local community in Geoje are confused and anxious.”

“Five hundred union members are going up to Seoul today to stop the sale,” said Shin Tae-ho, deputy head of the labor union’s Geoje branch. “I still don’t understand why the city decided to have the meeting today.”

“We have to unite to stop the sale,” Shin added. “But the city held a meeting a month after the plans for the sale had been announced.”

Shin showed anxiety over the possibility that another round of restructuring may take place at the shipyards when the sale is complete.

Participants demanded a clear stance from the mayor on the current situation with Daewoo as they voiced against the sale of Daewoo to Hyundai Heavy Industries.

“Daewoo will become no more than Hyundai Heavy’s subcontractor when the takeover is complete,” said Lee Gil-jong, an executive at the Geoje Citizens’ Coalition for Economic Justice.

“This issue involves not just the workers at Daewoo Shipbuilding, but also the 250,000 residents of Geoje and the 3.4 million people living in South Gyeongsang Province. Both conservatives and progressives need to approach the issue from a bipartisan point of view.”

“We need to establish a task force to make Daewoo a civil enterprise,” Lee added.