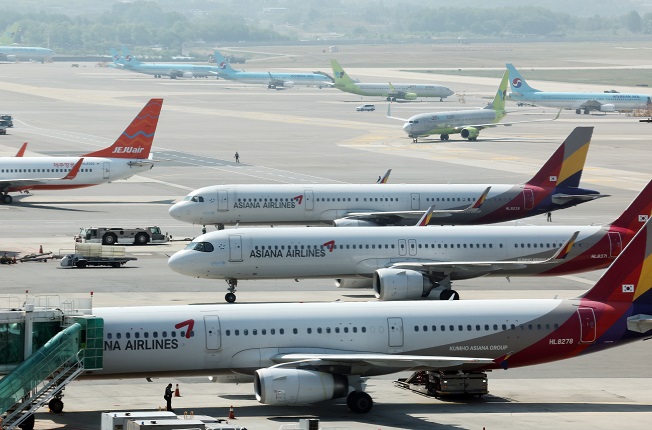 Passenger jets of Asiana Airlines are parked at the Gimpo International Airport in Seoul on May 24, 2022. (Yonhap)

SEOUL, June 22 (Korea Bizwire) — South Korea and Japan have agreed to reopen an air route between Seoul’s Gimpo and Tokyo’s Haneda airports after more than two years of suspension due to the COVID-19 pandemic, the transport ministry said Wednesday.

The flight service between the two airports will resume next Wednesday eight times per week, according to the Ministry of Land, Infrastructure and Transport.

South Korea’s two major airlines — Korean Air and Asiana Airlines — and their counterparts — Japan Airlines and All Nippon Airways — will operate the route, the ministry said.

The number of flights will increase in phases starting next month in consideration of demand and preparations by airliners.

In 2019, there was a total of 21 regular flights by the four airlines every week.

Seoul and Tokyo had been in close consultation on the resumption of the key route, which has been suspended since March 2020, and they agreed upon the reopening during a virtual meeting between their airline authorities Tuesday, the ministry said.

“The Gimpo-Haneda route bears a significant symbol of the bilateral exchanges. The flight resumption is expected to serve as a chance to revitalize exchanges,” Land Minister Won Hee-ryong said.

The culture and tourism ministry said it plans to hold sessions to promote trips to South Korea in major Japanese cities in the second half of the year.