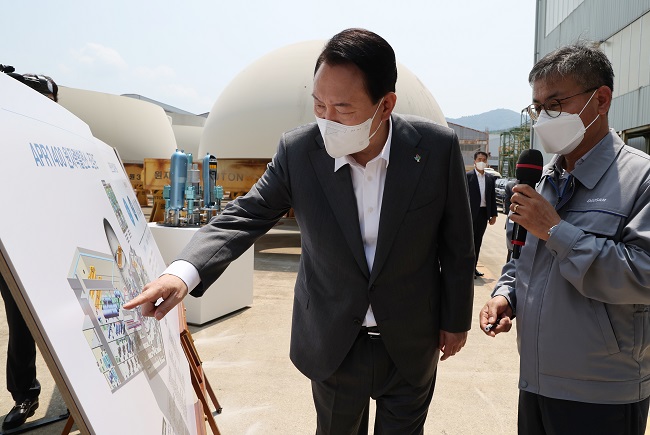 The move came as the government is pushing to rebuild the nuclear industry in a reversal of the preceding liberal administration’s nuclear phase-out policy.

The committee will devise tailored strategies to boost exports in accordance with the particulars in each nation, pending issues, and types of nuclear exports, according to the Ministry of Trade, Industry and Energy.

It will provide consulting services to companies in the sector in terms of financing and overseas promotions, and set up a system to give them up-to-date information on international bidding.

The government also vowed to provide the firms with work worth over 1 billion won (US$757.81 million) for work at home within this year.

The committee involves nine ministries, including the finance, foreign and land ministries, as well as related public institutions and civil experts. It is the first entity of its kind since 1978 when the country began commercial nuclear energy operations, the ministry said.

“We are to hold a committee meeting every month to update strategies to enhance corporate competitiveness, share related information with companies and check related developments,” a ministry official said.

During the inaugural meeting on Thursday, Industry Minister Lee Chang-yang vowed efforts “to open a new era of exporting nuclear power generation” as many nations, including the Czech Republic, Poland, Britain, and Saudi Arabia, have sought cooperation with South Korea in the sector.

South Korea has been working to participate in several major nuclear reactor construction projects overseas, including Poland’s program of building six nuclear reactors and the Czech Republic’s project to rebuild an additional reactor in its southern region of Dukovany.

In 2008, South Korea won its first full nuclear power project, when it signed a nuclear power deal with the United Arab Emirates (UAE) for the Barakah reactors construction project.

The Seoul government is pushing to boost the country’s generation of nuclear power to more than 30 percent of its total energy creation by 2030 to boost energy security and better meet carbon neutrality goals.