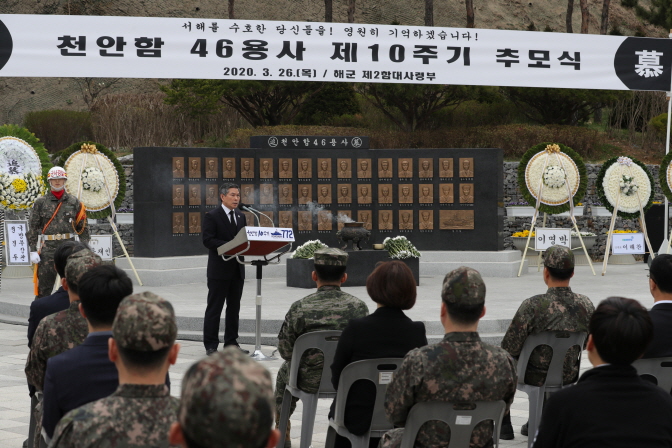 The Cheonan went down near the Northern Limit Line (NLL), the de facto maritime border between the two Koreas, on March 26, 2010, killing 46 sailors.

After an international probe, the South concluded the sinking was caused by a torpedo attack by a North Korean submarine.

“We should protect the NLL all the more tightly to make sure past sorrows such as the Cheonan attack never are repeated, and establish North Korea’s denuclearization and the Korean Peninsula’s lasting peace,” the minister said during a memorial ceremony at the Navy’s 2nd Fleet Command in Pyeongtaek, 70 kilometers south of Seoul.

It marked the first time a defense chief had presided over the annual ceremony. Also in attendance were survivors and the bereaved families of the fallen sailors.

During his speech, the minister said the military will consider naming one of its new frigates “Cheonan” in an effort to honor the sacrifices and patriotism of the fallen sailors and carry on their commitment to maritime defense. 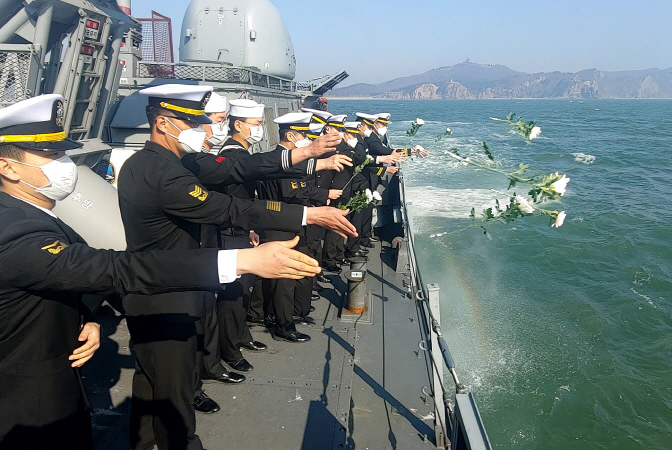 “We will continue our efforts so that the Cheonan warriors who died while defending their homeland and late Warrant Officer Han Joo-ho can be remembered forever,” Jeong said. Han, a veteran diver of the Navy, died during the search operations.

Names of warships are decided through a Navy committee months before their launching ceremony.

Thursday’s event was held in a scaled-back manner with tightened quarantine measures due to the new coronavirus, the ministry said.

United Nations Command (UNC) also honored the fallen sailors and a diver who was killed during rescue efforts at the time of the sinking.

“We shall never forget these ROK warriors and the cost of freedom they paid for with their lives,” the UNC said in a Facebook post. ROK is the acronym of South Korea’s official name, the Republic of Korea.