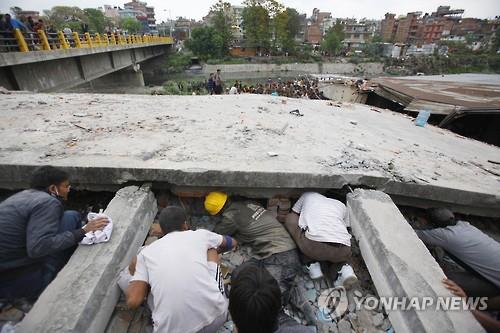 Korea is looking into the possibility of offering Nepal relief funds and sending a message of condolence. (image: Yonhap)

The official told Yonhap News Agency the government is looking into the possibility of offering Nepal relief funds and sending a message of condolence.

“We will see in what areas relief efforts will be needed, and then decide how we will help (Nepal) based on what we can do the best,” the official said. “As for sending an emergency response team, we’ll have to see if there will be any specific requests and what the rest of the international community does.”

A 7.8-magnitude earthquake on Saturday devastated the nation, leaving more than 1,800 people dead and thousands of others injured. One South Korean was hurt while building a local hydroelectric power plant in a region 70 kilometers north of Kathmandu, according to the foreign ministry, adding that the injury wasn’t life-threatening.

The ministry has set up an emergency response center, and the South Korean Embassy in Nepal is checking to see if there are more injuries among South Koreans.

About 650 South Koreans are living in Nepal, along with several other tourists.

Separately, the Korean Red Cross said it has decided to offer Nepal US$100,000 in relief funds and ship thousands of blankets and emergency kits. It is also preparing to dispatch a team of emergency medical workers to the devastated country.

The Korean Red Cross also said it will start online and offline fundraising campaigns on Sunday.

Kim Sung-joo, head of the relief agency, has sent a letter of condolence to her Nepalese counterpart Sanjeev Thapa, vowing to provide quick support to help Nepal bounce back from the disaster.