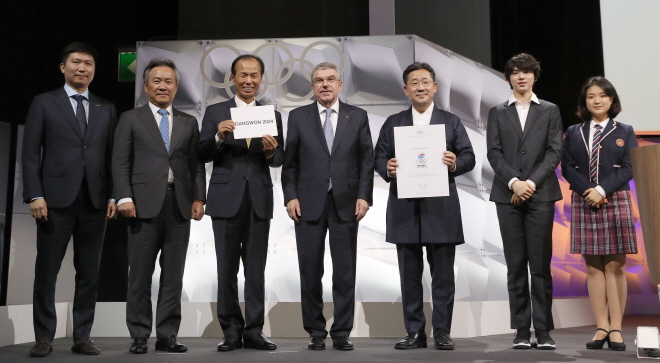 Choi Moon-soon (3rd from L), governor of South Korea’s Gangwon Province, holds a card showing the name of Gangwon Province of South Korea as the host of the 2024 Winter Youth Olympics, following an election at the 135th International Olympic Committee (IOC) Session in Lausanne, Switzerland, on Jan. 10, 2020. (image: Ministry of Culture, Sports and Tourism)

The International Olympic Committee (IOC) awarded Gangwon Province in eastern South Korea the right to stage the fourth edition of the quadrennial youth competition, following a vote during its 135th Session in Lausanne, Switzerland, on Friday.

Of 81 valid votes, Gangwon received 79 votes in its favor, with only two against its bid. South Korea is now the first Asian country to host the Winter Youth Olympics.

Gangwon is home to PyeongChang, the host city of the 2018 Winter Olympics. The neighboring towns of Gangneung and Jeongseon held skating and skiing events during the Olympics, too.

For the 2024 Winter Youth Olympics, the province plans to use existing facilities from 2018.

Romania’s Brasov, Bulgaria’s Sofia and Russia’s Sochi were other candidates in the preliminary stage, but Gangwon was named the lone “preferred host” by the IOC’s Executive Board last December under the modified bidding process.

Last month, the IOC said its Executive Board would initiate “a targeted dialogue” with South Korea as the preferred host, following the recommendation from the IOC’s Future Winter Host Commission.

The IOC created Future Host Commissions for both Winter and Summer Olympics in October 2019, to ensure more flexibility in the selection of host cities.

Previously, the IOC removed a rule stipulating that Olympic hosts be chosen seven years in advance, while also allowing multiple cities, regions or countries to co-host the Olympics.

The 2024 Winter Youth Olympics is the first competition whose host has been determined by this new bidding process.

IOC President Thomas Bach had said in December that the targeted dialogue between the IOC and the Korean Sport and Olympic Committee (KSOC) was “the last step before the potential election of the host.”

The KSOC announced its bid for the 2024 Winter Youth Olympics in August last year. 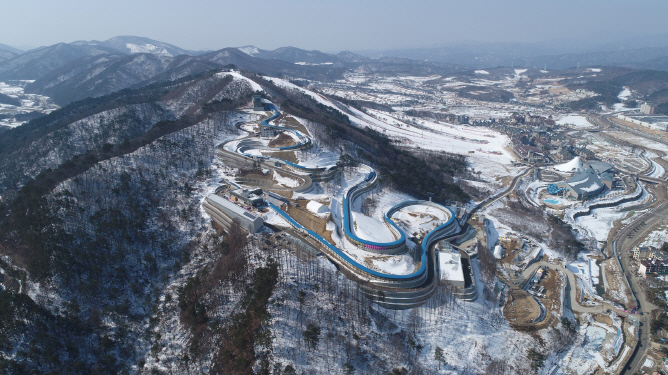 An aerial view of the Olympic Sliding Centre in PyeongChang, 180 kilometers east of Seoul. (image: Ministry of Culture, Sports and Tourism)

The Future Winter Host Commission said its recommendation for the South Korean bid was based on the following: a positive technical feasibility assessment; solid support from all levels of government; the opportunity to bring the Winter Youth Olympics to Asia for the first time after three editions hosted in Europe; the opportunity to build on the legacy of the 2018 PyeongChang Winter Olympics using the existing venues; and the opportunity to further leverage sport to continue dialogue for peace on the Korean Peninsula.

South Korea is also hoping to co-host the Winter Youth Olympics with North Korea so that it can lay the groundwork for Seoul’s bid to co-organize the 2032 Summer Olympics with Pyongyang.

Bach said earlier that the IOC welcomes the idea of joint-Korean hosting of the 2024 Winter Youth Olympics.

Following the election, South Korean Sports Minister Park Yang-woo said the 2024 competition will “be a historic occasion that adheres to the IOC’s Olympic values of peace and cooperation.”

Choi Moon-soon, governor of Gangwon Province, thanked the IOC members for giving his province another opportunity to host an IOC competition.

“It means a great deal to have this event in Asia for the first time,” Choi added. “And the 2024 Winter Youth Olympics will go a long way toward extending the legacy of the PyeongChang Winter Olympics.”

Austria’s Innsbruck and Norway’s Lillehammer staged the first two editions of the Winter Youth Olympics. Lausanne is currently hosting the 2020 event, set to wrap up on Jan. 22, with more than 1,800 athletes competing in 81 events.