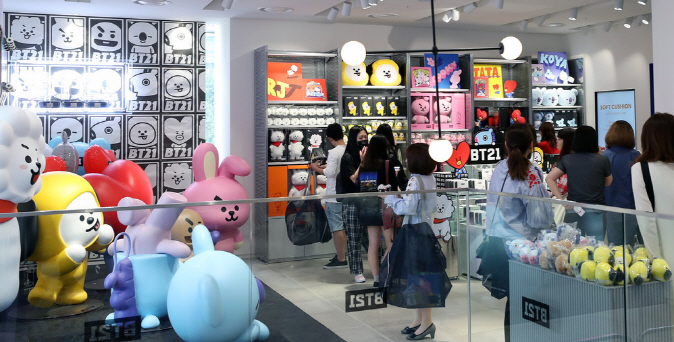 The card was from the boy band’s latest album, “Love Yourself: Answer,” which comes with a random photo of one of the seven members.

“It’s a probability of one in seven,” said Choi. “If you are unlucky, you buy seven BTS albums but have seven of the same photocard that you least like.”

To beat the odds, she used social media, where many young K-pop superfans trade items related to their idols. She found one person who had Jungkook’s card and bought it.

Led by the recent global fame of BTS, K-pop’s popularity has expanded far and wide, and a growing number of fans like Choi enthusiastically spend their time and money collecting even the smallest souvenirs that remind them of their favorite pop stars.

Mugs, notebooks, pens, bags, T-shirts, tumblers and slippers with photos of BTS, EXO, BLACKPINK, TWICE and so on all stir K-pop fans’ desire to be closer to the performers they like the most.

“I spent more than 1 million won buying BTS merchandise last year,” said another BTS fan who asked for anonymity. “Sometimes even I think it’s a bit excessive, but it’s one of my big hobbies.” 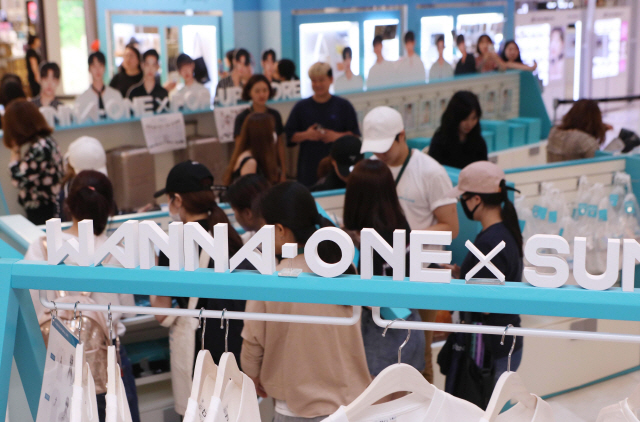 According to the latest data from the Korea Creative Content Agency (KCCA), the total sales of the South Korean music industry reached 2.87 trillion won in the first half of last year, up 9.2 percent from a year earlier.

Its merchandise sales are estimated to be 150 billion won for last year alone, including privately created items and pirated goods.

“Fans with huge loyalty to their singers buy albums and goods together. Many of them create unofficial goods too,” said Sung Mi-kyoung, a senior researcher at the KCCA. “The idol culture started to explode in the latter half of 2017 on the back of the rising global popularity of BTS. Estimates of 150 billion won in sales are not groundless.”

According to their regulatory filings, the three listed companies’ combined sales of albums and digital music content reached 76.69 billion won in the first half of 2018.

And they posted a combined 105.44 trillion won in sales from merchandise, royalties and other fees over the cited period.

“It has been a minor culture among young fans of K-pop,” said Sung. “But from now on, its huge potential will attract the entire entertainment industry to focus on this market.”

She said 50 percent of South Korean teenagers have bought a K-pop item at least once.

“These young teens who are very willing and familiar with spending money on goods related to their idols will grow up and have greater purchasing power when they become thirty-somethings or forty-somethings.”

Against this backdrop, the K-pop market is broadening into a comprehensive content industry linked with performance, fashion, food, tourism and even manufacturing.

Tens of money-making goods and events can be derived from a picture of a K-pop singer, she noted.

“People do not only consume music to listen to but also enjoy such entertainment in other forms. The music industry now comes with concerts, merchandise and intellectual property,” the KCCA expert said. “I hope the public sector will fine-tune the legal issues involving intellectual rights to level the playing field and foster the content industry further.”