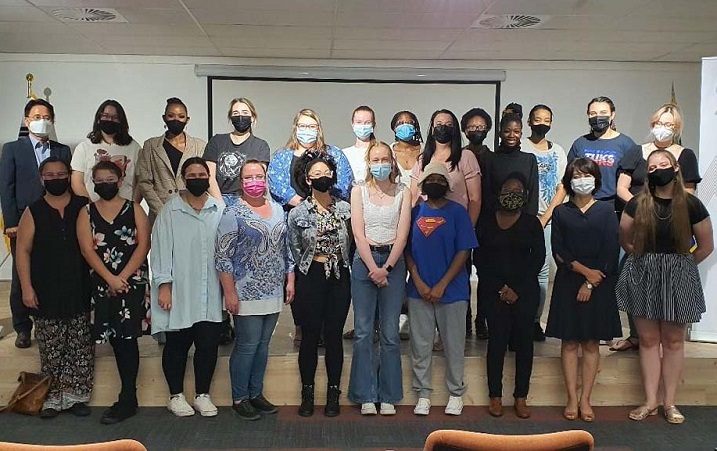 A group of Korean-language learners poses for a photo during a ceremony at the Korean Culture Center in Pretoria to mark the opening of the King Sejong Institute as the first Korean-language education center in South Africa, in this file photo taken March 28, 2022. (Yonhap)

The 23 new King Sejong Institutes will be located in 19 countries in Asia, Africa and Europe, according to the Ministry of Culture, Sports and Tourism.

The designation will increase the number of King Sejong Institutes to 244 in 84 countries around the world, from the original 13 institutes in 2007.

Of the 19 countries, Bangladesh, Saudi Arabia, Kuwait, South Africa, Tunisia, Luxembourg and Finland will have their first such institutes, it added.

South Korea is also among the countries that will have its first Sejong Institute. The facility will open in Seoul to teach Korean language and culture to Korean-born adoptees who have returned to their birth country.

A total of 82 organizations in 39 countries had applied to be chosen as a King Sejong Institute this year, the ministry said.

“We discovered that the interest of people from around the world in the Korean language and culture is very high even at a time when in-person education is difficult due to the protracted COVID-19 pandemic,” said Lee Jin-sik, a key ministry official handling cultural policies.