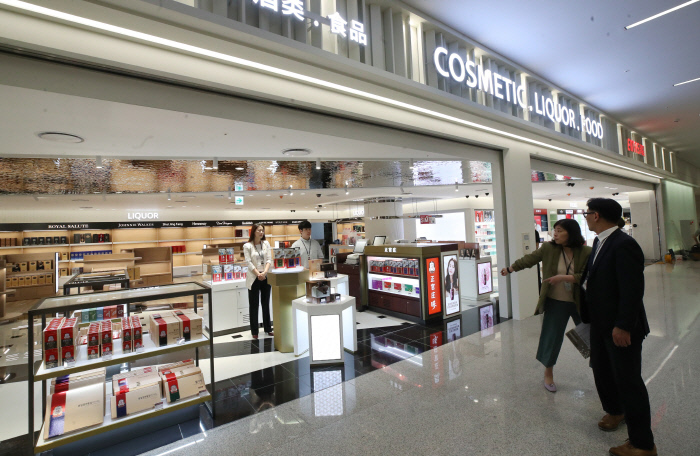 Three arrival duty-free shops opened at Incheon International Airport, with two of them located in Terminal 1 and the other in Terminal 2. (Yonhap)

SEOUL, May 31 (Korea Bizwire) — South Korea launched its first on-arrival duty-free shops on Friday, with the government planning to ease the purchase limit at departure stores and to provide better tax benefits for travelers.

Three arrival duty-free shops opened at Incheon International Airport, with two of them located in Terminal 1 and the other in Terminal 2, according to the Ministry of Land, Infrastructure and Transport.

The shops handle 10 products, including alcoholic beverages, perfume and cosmetics, but not tobacco. The purchase limit at arrival shops is set at US$600.

Last year, the government unveiled a plan to allow duty-free shops in arrival terminals in a bid to reduce discomfort experienced by tourists and boost domestic consumption. The arrival duty-free shops could create hundreds of jobs, the ministry said.

In response to rising demand for duty-free shopping, the government plans to allow travelers to purchase more products at stores located in departure halls, according to Finance Minister Hong Nam-ki.

South Koreans can currently purchase up to $3,000 at departure duty-free stores.

“As the purchase limit at departure duty-free shops was announced back in 2006, we are considering revising up the ceiling following changes in various circumstances, like market prices and income levels,” Hong said.

While the combined value of products eligible for tax-free benefits from both duty-free stores stands at $600, the limit may be raised depending on the performance of the arrival shops.

The country increased the tax-exemption limit from $400 to $600 in 2014. Separately, South Koreans can also enjoy an additional tax exemption for a limited amount of liquor, cigarettes and perfume.